Lion Luncheon 2017: ‘We are the first responders’

When Edie Lutnick’s brother, Gary, perished during the September 11, 2001 terror attacks, it was not her first experience with loss. 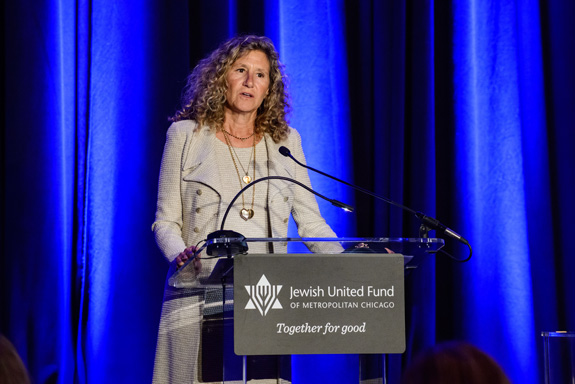 When Edie Lutnick's brother, Gary, perished during the September 11, 2001 attacks on the World Trade Center, it was not her first experience with loss. Lutnick's parents both died young from cancer -- and as the oldest of three siblings, it fell upon her to raise her younger brothers from youth.

"When 9/11 hit, I didn't just lose my brother -- I [felt like] I lost my child," said Lutnick, in a moving address to nearly 400 women at the Jewish United Fund's 2017 Lion Luncheon, which took place Thursday, Sept. 8 at The Standard Club.

Lutnick, who had worked with both her brothers at the New York-based financial services firm Cantor Fitzgerald, also lost over 600 colleagues and friends in the deadly 2001 attacks. But in the aftermath of overwhelming tragedy, she and her surviving brother, Cantor Fitzgerald CEO Howard Lutnick, fought the urge to sink into despair -- and instead pooled their resources to create a fund to support survivors.

"I realized everyone else who I thought was more qualified than me to do this was gone," said Lutnick. "And so on September 14, 2001, The Cantor Fitzgerald Relief Fund was born." Today, the Fund has distributed more than $292 million since its inception to support victims of terrorism, emergencies and natural disasters worldwide.

"We grew up with the Jewish understanding that you helped others," said Lutnick, who credited her late parents with instilling in her the Jewish values of charity and repairing the world, and said she felt a kinship with the hundreds of women in the room who had come together to support philanthropy through their involvement with JUF.

"There is a poetic synergy between [the 9/11 first responders] and the women in this room today," said Jodie Berkman, JUF's 2017 Women's Board Vice President of Campaign. "Like them, we are the first ones on the scene when crisis strikes. As leaders of the JUF community, we are also first responders. When a member of our Jewish family is in need, whether she lives across town or across the ocean, we are there for her."

The luncheon also featured the presentation of the Kipnis-Wilson/Friedland award, given biannually to women who demonstrate exceptional leadership and commitment. The 2017 award was presented to Barbara Kaplan Slutsky by Jane Cadden Lederman, president of the Women's Board.

JUF's Women's Division is a dedicated group of women of all ages who support JUF's philanthropic and community mission. Their energy is rooted in the spirit of klal yisrael, the belief that all Jews are responsible for one another. Each group serves to educate, inspire and connect women, leveraging the power of the collective. In upholding their Jewish responsibility, they fundraise, develop leadership and perform mitzvot to make a profound impact locally, in Israel and around the world.

See all Oy!Chicago stories
Connect with us