Falling back into culture

Falling back into culture 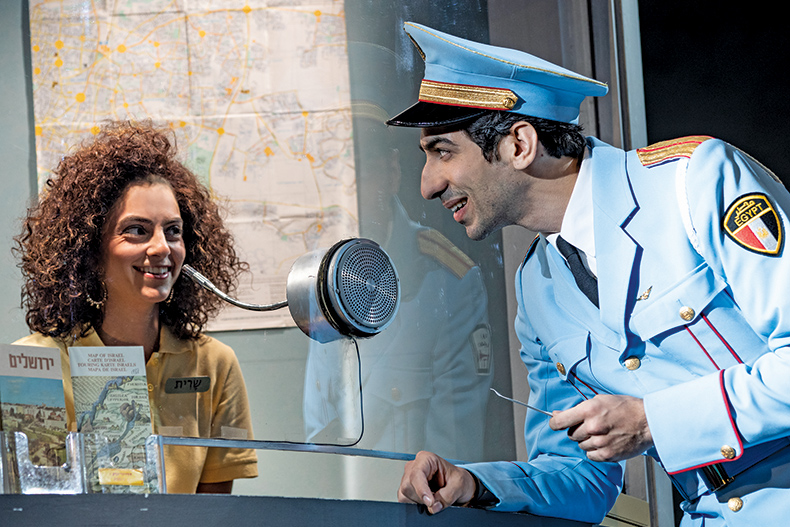 Chicago is a year-round cultural engine that refuses to be slowed down by either sweltering heat or bitter cold. But there is something about September that sends the arts scene into overdrive as subscription seasons for theater, dance, and classical music get underway, and as all the activity that took place on outdoor stages throughout the summer now moves back indoors.

Here is a sampler of the early Fall harvest:

The Exceptional Beauty of 'The Band's Visit':

The Band's Visit, the Broadway musical based on Eran Kolirin's popular 2007 Israeli film, earned 10 Tony Awards in 2018, including those for best musical, best score (David Yazbek), best book (Itamar Moses), and best director (David Cromer). It fully deserved every one of them, and the fact that the show was far from standard Broadway fare only made such recognition all the sweeter.

The musical, which began a national tour in June, will arrive at Chicago's Cadillac Palace Theatre for a brief run (Sept. 3 -15), and it is not to be missed.

Set in 1996, the fictional story begins as members of the Alexandria Ceremonial Police Orchestra of Egypt arrive at the central bus station in Tel Aviv en route to a performance at an Arab cultural center in the Israeli city of Petah Tikva. When no one shows up to take them there their leader, the shy Colonel Tewfiq Zakaria decides to take a bus, but the band is accidentally sold tickets to Bet Hatikvah, an isolated town in the Negev desert where they are offered to stay the night at a café owned by Dina, an alluring Israeli divorcee who greets Tewfiq with the song "Welcome to Nowhere."

What happens next has practically nothing to do with the geopolitics of the region and everything to do with loneliness, the search for human connection, and the magic of music and film. ("Omar Sharif" has become the musical's most iconic song).

Cromer, who established his career in Chicago with a long list of eye-opening productions of both classics and new works (most recently with Next to Normal at Glencoe's Writers Theatre), gained national attention for his exceptional revival of Our Town that became the toast of New York in 2009. He made his first visit to Israel in the time between the Off Broadway and Broadway productions of The Band's Visit.

"And when I arrived I realized how right the world we had created seemed," he said. "I went to Yeruham, the town in the Negev where the film was shot, and I sensed how it had captured the vastness and beauty of the place, something I wanted to make sure our production did. Once called 'a development town,' with a tile factory the main source of work, Yeruham had an influx of Romanian survivors of the Holocaust as its principal early population. But it has grown since 1990, with the arrival of many Russians and others, and it now has a beautiful hotel and a little community center."

"We wanted the show to be as authentic as possible, but there also was some fantasy," said Cromer. "For example, the blue uniforms worn by the Egyptian musicians were invented. As for the songs, they suggest the isolation of the characters, and the walls and borders that exist between them. And we saw no need to inject the constant energy that is so often part of Broadway musicals."

Cromer oversaw the casting and direction of the touring company for The Band's Visit, with Sasson Gabai reprising his role as Tewfiq (which he played in the film, and during part of the Broadway), and, as Dina, actress Chilina Kennedy (who had a long run as a replacement star in Broadway's Beautiful-The Carole King Musical).

Next up for Cromer is the Broadway premiere of Adam Rapp's new play, The Sound Inside, starring Mary-Louise Parker.

For tickets to "The Band's Visit," go to  BroadwayinChicago.com .

And now for something political:

Oslo, the 2017 Tony Award-winning play by T.J. Rogers, is far more overtly political than The Band's Visit. Yet at its core, this admittedly "partially fictionalized" drama is an exploration of the many distinctive behind-the-scenes personalities involved in finessing the talks that led up to the Oslo Accords. That agreement, between Israeli Prime Minister Yitzhak Rabin and PLO Chairman Yasser Arafat, was captured in an iconic photograph of the handshake between the two men that took place on the White House lawn on Sept. 13, 1993, with a smiling a president Bill Clinton looking on.

Among the lesser known personalities involved were Norwegian diplomat Mona Juul and her husband, Terje Rod-Larsen, who were crucial in getting the negotiating process off the ground in meetings held secretly in Norway.

The Chicago premiere of Oslo is a joint production of TimeLine Theatre and Broadway in Chicago. It will run Sept. 10 - Oct. 20 at the Broadway Playhouse at Water Tower Place, with Nick Bowling as director, and Bri Sudia and Scott Parkinson as the Norwegians.

"From Here to There" is the umbrella title of a new exhibition at Spertus Institute for Jewish Learning and Leadership (running Sept. 23 - Jan. 19) that will feature drawings, paintings, sculptures, and videos by Chicago artists who "explore the relationship between the physical and the spiritual."

The artists-Linda Robinson, Ellen Holtzblatt, Lilach Schrag, and Michelle Stone-have formed "a community of practice" based on shared inspiration and a drive to innovate. And their joint show, curated by Sarah Krepp, can be seen as evoking the Jewish concept of "Lech Lecha"-a Hebrew phrase that translates as "go forth," and suggests that "the artists are determined to take risks and stretch the boundaries of their artistic practice."

Also at Spertus this month will be the North American premiere of Miguel Kohan's Spanish language documentary La Experiencia Judia De Basavilbaso a Nuevo Amsterdam ("The Jewish Experience from Basavilbaso to New Amsterdam").

The film is described as "a rare voyage of discovery unearthing Jewish history in the Americas extending back to the time of the Spanish Inquisition," with Kohan making stops in Brazil, Surinam, Jamaica, and his native Argentina.

An exercise in 'meandering' at Chicago's MCA:

Assaf Evron, an Israeli-born, Chicago-based artist and former photojournalist, is fascinated by the notion of "meander design."

And just exactly what does that mean? It's a term that describes a popular decorative pattern used since ancient times that is based on the natural curve of rivers and streams. And it now animates the multi-faceted art by Evron that comprises "Chicago Work: Assaf Evron," the artist's first solo museum exhibit, which runs through Feb. 16, 2020 at Chicago's Museum of Contemporary Art.

Among the pieces in the show are an installation re-creating the linear pattern of "the meander" as found in the stone pavement of Rabin Square in Tel Aviv, and a photo cut in the shape of a Greek wine vessel that traces the meander design from natural landscapes in Israel to modern architecture in Chicago.