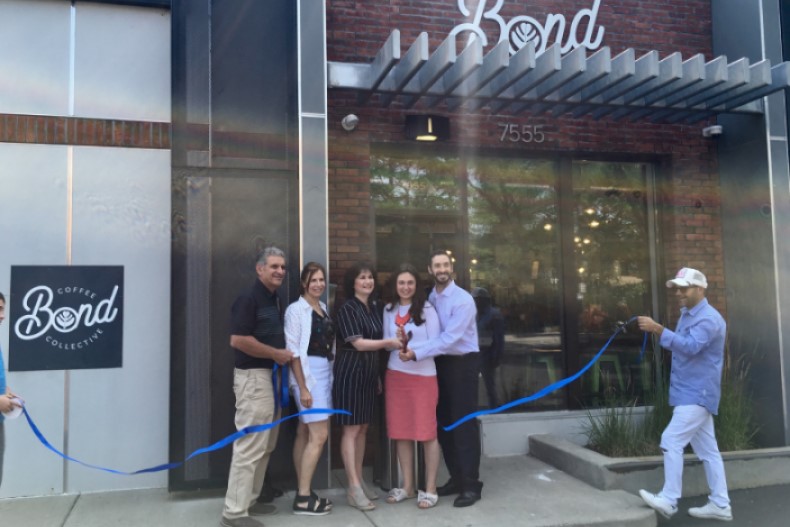 Let all who are hungry come and eat-and have a great cup of coffee.

On a sunny Thursday in July, Chicagoans of all persuasions gathered at the corner of Howard and California for a unique celebration: the grand opening of a new neighborhood business, a kosher café called Bond Coffee Collaborative.

While coffee has many fans, the opening of a new coffee shop does not typically draw such a sizable or an enthusiastic crowd. But that morning, the air buzzed with anticipation as Jews and non-Jews alike eagerly waited for the community's only artisanal, kosher café to open its doors for the first time.

The inspiration for Bond came from co-founder Max Dayan's desire to bring Chicago's rich coffee culture to his community in West Rogers Park.

"When I started to work in development," said Dayan, "I spent a lot of time in coffee shops. They are important places for creating bonds and solidifying relationships. I couldn't believe that, specifically in this area, where there is such a robust community, there wasn't a neighborhood coffee shop where you could get a good cup of coffee."

To Dayan, the absence of a local coffee shop, kosher or not, exposed a greater unmet need in his community; the need for a welcoming place for neighbors to gather and connect. This sparked his inspiration for Bond in the heart of one of Chicago's most diverse neighborhoods.

According to Dayan and co-founder, Michael Schultz, it was important to them that Bond offer an inclusive experience. As such, it was imperative that the menu cater to the religious customs and dietary needs of the whole community. Not only is Bond Chalav Yisrael (kosher-certified dairy), but the menu includes vegan, vegetarian, and gluten-free offerings as well. "There's no reason kosher food can't be trendy, delicious, healthy, and cool," Dayan said.

Bond is a deeply meaningful project for both Dayan and Schultz. The shop is named for Dayan's mother Bonnie and is his tribute to her remarkable ability to bring people together and make them feel welcome. Bond is also just around the corner from where Schultz's Grandpa Irv lived when he was a boy. Schultz adored his grandfather, and sees Bond as an opportunity to share the love he felt in that community with the next generation.

The duo is serious about their commitment to giving back to the community: Bond is registered as a social enterprise. Down the road, Dayan and Schultz plan to make Bond a customized employment site where jobseekers with disabilities can receive individualized supports and build a meaningful career.

The café already has a strong relationship with the JCFS Chicago Knapp School & Yeshiva, which provides therapeutic education for children living in the Chicago area. Nestled in the café next to the Bond kitchen, there is an entire wall of brightly colored mugs. Each one of them was crafted by a student at the Knapp School. Students were not only paid for their artwork, but extended an open invitation to come visit Bond anytime.

"We live in a world that's so polarized, Max and I wanted to create something that celebrates diversity and brings people together," Schultz said, "a place where everyone is welcome no matter their beliefs or background. Everyone deserves a place to go and get a good cup of coffee."