Think of this month's column as a wide-ranging Jewish portrait gallery... 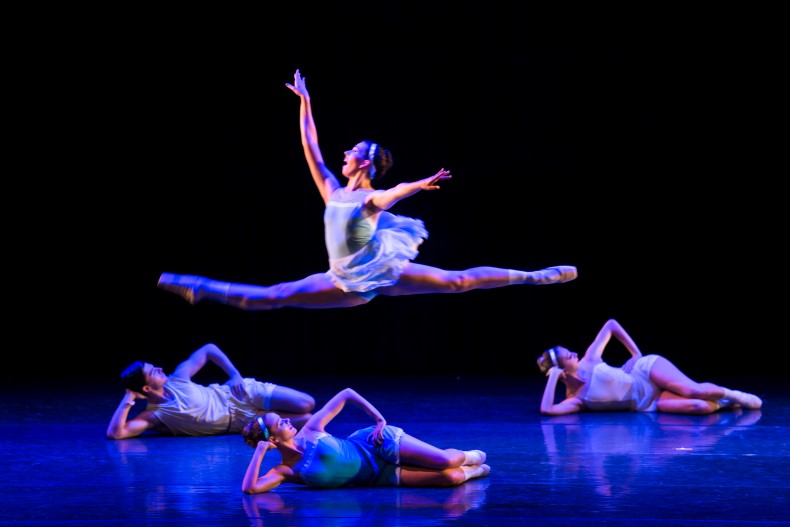 The ballet “Butterfly” will be featured by Ballet 5:8 on March 7. Photo credit: Lana Kozol.

Andy Warhol's 'Ten Portraits of Jews of the 20th Century'

The names are instantly recognizable: Sarah Bernhardt, Louis Brandeis, Martin Buber, Albert Einstein, Sigmund Freud, George Gershwin, Franz Kafka, the Marx Brothers, Golda Meir, and Gertrude Stein. Yet they are not the sort of "celebrities" who ordinarily attracted the attention of Andy Warhol, the Pop Art maven of the 1960s and '70s famous for his images of everyone from Marilyn Monroe to Chairman Mao (as well as Campbell's Soup cans).

But, in 1980, the New York art dealer Ronald Feldman, along with Susan Morgenstern, art director of the Jewish Community Center of Greater Washington, devised a list of names of iconic 20th Century Jewish figures and commissioned Warhol to create a series of silk-screened canvases in his distinctive style.

An initial exhibit of the works at New York's Jewish Museum riled critics, one of whom described the portrait series as "hypocritical, cynical, and exploitative." But 28 years later, in 2008, in an exhibit at the same museum titled "Warhol's Jews: 10 Portraits Reconsidered," the reception was more welcoming.

Now, in the wake of the vast Andy Warhol exhibit recently mounted by the Art Institute of Chicago, and amid the impassioned discussions about who has the "right" to depict any particular group of people, the Spertus Institute of Jewish Learning and Leadership is mounting an exhibit titled "Who Represents Us? Warhol's Ten Portraits of Jews of the 20th Century," that will run March 23-Sept. 21.

Displayed along with Warhol's portraits will be a variety of modern art pieces from Spertus' own collection that, according to Dr. Dean Bell, President and CEO of Spertus, "expand the conversation." Among these will be a portrait of Ben Gurion by the contemporary Israeli pop artist David Tartakover; a group of Israeli stamps and coins featuring portraits of famous figures; a large piece by Yaacov Agam, the Israeli artist known for his Op Art and Kinetic Art works, and the work of Igael Tumarkin, an Israeli painter and sculptor.

"We wanted to suggest some of the many different ways Jews are represented, as well as how this changes over time," said Bell.

Ballet 5:8 about Terezin at Studebaker

January 27th of this year marked the 75th anniversary of the liberation of the Nazis' Auschwitz concentration camp in Poland. Many of those killed in the camp had previously spent time at Terezin, a strange hybrid of ghetto, camp, and way-station for tens of thousands of Jews located in the German-occupied region of Bohemia and Moravia.

One of the more remarkable aspects of that camp were the secret art classes for the children held there between 1942 and 1944. They were led by Frederika Dicker-Brandeis, an Austrian-Jewish artist and educator, and a collection of the poems and artwork by those children was later collected in a book, I Never Saw Another Butterfly . That book inspired Mexican-American choreographer Juliana Rubio Slager-co-founder of suburban Chicago's Orland Park-based Ballet 5:8 (which bills itself as "the only major Christian professional ballet company in the Midwest") to create Butterfly , an evocation of a Holocaust survivor from Terezin, and of the power of hope.

Butterfly will be featured on a program by Ballet 5:8 to be performed March 7 at the historic Studebaker Theatre, 210 S. Michigan Ave. The program of one-act works also will include a world premiere by Kevin Jenkins and two other ballets by Rubio-Slager. For tickets visit ballet58.org.

On pretty much any night or weekend afternoon of the year it's a good bet you will find David Rosenberg in the lobby of one of Chicago's countless storefront theaters-knowledgeably chatting it up with reviewers from a slew of city and suburban media outlets, distributing impeccably prepared press kits, and happy to answer countless questions about the show about to open.

Between March and June alone, this masterful one-man-band of theatrical public relations will be the "front man" for productions staged by close to a dozen companies including Griffin Theatre, Shattered Globe, The Gift, Raven, Prop, Underscore, Strawdog, and Firebrand.

A Highland Park native, Rosenberg earned a B.A. in Telecommunications from Indiana University Bloomington, and began his career as a writer and producer for such organizations as CNN Headline News, WGN-TV, and Fox New Chicago. In 2002, he joined the entertainment PR firm of Margie Korshak, Inc., where he handled such clients as Broadway in Chicago, and the Auditorium and Harris theaters. And in 2007, he was named Communications Director of Steppenwolf Theatre and helped oversee the transfer of its hit production, August: Osage County , to Broadway, London, and Sydney.

In 2012, after a brief stint as a flight attendant (he is an enthusiastic traveler), Rosenberg formed his own company, DRPR, and since then he has represented more than 30 Equity and non-Equity theater companies.

"Companies with large budgets can do a lot of advertising and have a built-in media-following that storefronts often lack," Rosenberg explained. "With storefronts you have a much better sense of the impact you have in terms of attracting both reviewers and audiences."

You know him as Harry Houdini, the fabled illusionist and escape artist who challenged himself by jumping off bridges in handcuffs, freeing himself from torturous water tanks of his own devising, and more. But he was born Erik Weisz in Budapest, Hungary, in 1874-the son of a rabbi who brought his wife and seven children to Appleton, Wisc. in 1878. His father served as head of the tiny Zion Reform Jewish Congregation there for four years before losing his job, at which point the family was plunged into dire poverty and moved to Milwaukee, where he began performing a circus act at the age of nine.

Houdini ran away from home at the age of 12, lived an itinerant existence, and then, in the summer of 1893, along with his younger brother, Theodore, headed to Chicago and the monumental World's Fair Columbian Exposition. There, on the midway, not far from the very first Ferris wheel, they staged their show, billing themselves as Modern Monarchs of Mystery.

For a description of that act, and a great deal more about the performer's strange and decidedly twisted life and remarkable career, you can now turn to Adam Begley's biography, Houdini: The Elusive American , the latest entry in Yale University Press' ever-expanding Jewish Lives Series. At the center of the book is this question: "Must a self-liberator also be a self-torturer?"  For more information visit yalebooks.yale.edu.

Hedy Weiss, a longtime Chicago arts critic, was the Theater and Dance Critic for the  Chicago Sun-Times  from 1984 to 2018, and currently writes for  WTTW-TV's  website and contributes to the  Chicago Tonight  program.

See all Oy!Chicago stories
Connect with us