Write On for Israel goes to Washington

Our first day in Washington, D.C. was filled with lobbying, so we started our preparation as soon as the plane landed. I had lobbied once before, at the AIPAC Schusterman High School Summit, but the 34-person cohort of Write On for Israel allowed for an intensive rehearsal session in order to ready ourselves for this experience.

When we arrived at the halls of Congress, we split into small groups and proceeded to the first of four meetings. My group headed to the office of my congressman, Rep. Mike Quigley, where we were greeted by the same staffer, Allison Jarus, who I had met at the AIPAC conference. I felt empowered to know that a staffer on Capitol Hill recognized the work that the Jewish teen community has put toward issues that are important to us. It was exciting for me, as a constituent, to be able to thank Rep. Quigley for his continued support of Israel.

Our group members were a bit tense in that first meeting, but as the day wore on, the nervous energy disappeared and we honed our messages as we presented our selected points. In the following meetings, I felt much more comfortable speaking my mind, as opposed to simply reading off the script.

These meetings not only allowed us to share our opinions with representatives and thank them for continued; they also helped us gain a deeper understanding of where each member stands on key issues. Through the four lobbying appointments that I participated in during our D.C. fly-in, I deepened my grasp of how Capitol Hill functions and why it is important to visit. 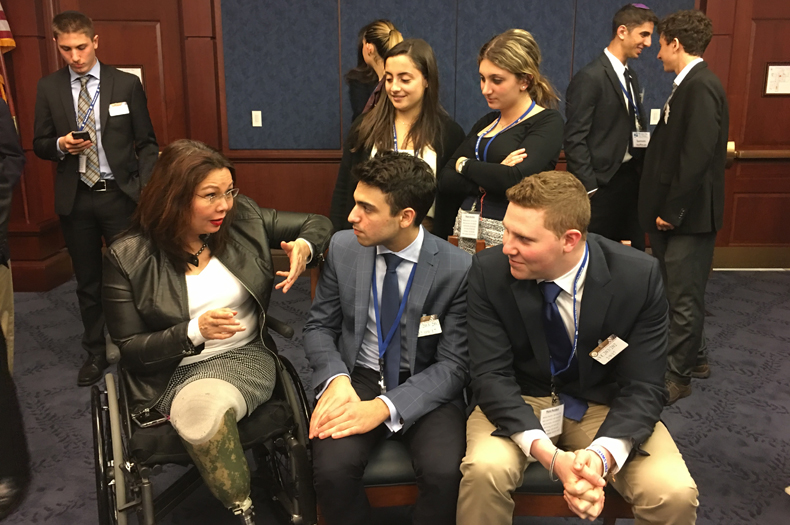 Write On Fellows meet with Sen. Tammy Duckworth on the second day of their D.C. fly-in..

The second and final day of our fly-in brought about new perspectives on issues in Israel and hope for the future. In the morning, we met with David Makovsky, the Ziegler Distinguished fellow at the Washington Institute for Near East Policy, who introduced a baseball analogy to help us in our future advocacy efforts. He expressed concern that young Israel advocates may become discouraged because we have not seen any major successes in the peace process.

As he outlined ideas for moving the peace process forward, he urged us to think about small-scale progress. “Don’t go for a home run,” he said, meaning, take smaller steps to ensure a positive outcome because if you aim for a “home run” too soon, it may not go as planned.

This discussion motivated me to work toward another great Israeli success in my lifetime. Makovsky’s insight promoted the Israel advocacy drive within each of the Fellows.

Later that day, we returned to Capitol Hill heard from a panel of Capitol Hill staffers. They helped me realize that working on Capitol Hill is not too far of a reach, and they stressed the importance of internships in achieving these goals.

Talia Grossman, a former Write On Fellow who attends American University and is currently an intern in JUF’s Washington office, was a case in point, and the fact that she was an active member of BBYO just a few years ago showed me that teens really can make a difference.

Next, we met Chris Homan (one of Sen. Richard Durbin’s senior staffers), who stressed the importance of staying focused on the goal of a two-state solution. He noted that without two states, the demography of Israel will change and it may no longer be a Jewish state.

Our final meeting of the day was with Sen. Tammy Duckworth, who noted that different pro-Israel groups often embrace different approaches. She described the situation as “two sides of the same coin,” referring to different opinions about what constitutes “pro-Israel.”

The trip was a highly impactful experience for me. I learned that in addition to the work of elected officials, staffers play a key role in the overall government process. I also understand that internships can be a large factor in paving the path towards Capitol Hill. This fly-In taught me skills that I will need to effectively advocate for Israel on a college campus and showed me ways in which I can get more involved in advocacy work on an even larger scale.

Sydney Weisman is a senior at Jones College Prep in Chicago, and a Senior Write On for Israel Fellow.