A return to the site of Tisha B’Av instills meaning

Not until a three-week vacation in Israel with my young sons in 2006 did Tisha B’Av—the ninth of Av, a day of communal mourning for Jerusalem’s two temples, destroyed by the Babylonians in 586 B.C.E. and by the Romans in 70 C.E.—really register in my consciousness 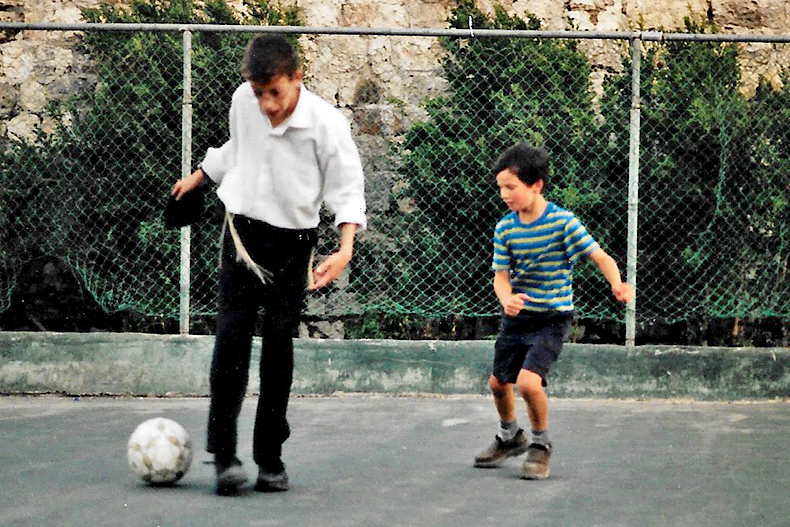 Tisha B'Av was always just another summer's day, off the radar, like my birthday passing with school chums away at sleep-away camp. I knew little about Tisha B'Av despite 12 years of attending Jewish schools. Teachers just didn't devote time in the curriculum to a vacation-period commemoration. While my parents observed tradition, they didn't attend services on Tisha B'Av or mention the holiday.

Not until a three-week vacation in Israel with my young sons in 2006 did Tisha B'Av-the ninth of Av, a day of communal mourning for Jerusalem's two temples, destroyed by the Babylonians in 586 B.C.E. and by the Romans in 70 C.E.-really register in my consciousness. I've observed it ever since, and will continue this year, from Saturday night to Sunday evening, August 10-11.

Our hosts in Efrat, a town south of Jerusalem, were the Aziz family. They prepared a hearty dinner ahead of the upcoming 25-hour fast, the only one besides Yom Kippur running an entire day. We ate, then joined them for synagogue services highlighted by the recital of the Book of Lamentations, an anguished dirge relating ancient Jerusalem's ruination.

What made 2006 the turning point? Being in Israel and the wartime context. Israel was fighting in the five-week-long Second Lebanon War that followed Hezbollah's invasion of the Jewish state's northern border to kill three Israeli soldiers and kidnap two others.

With the Lebanese militia's firing of thousands of rockets, our plans to camp in northern Israel changed and we instead traveled in other places. Wanting to lend a hand, feeling guilty for vacationing while many Israelis were being terrorized and killed, and sensing a teaching moment, I brought my sons to a Jerusalem boarding school one day. Children from the north were being hosted there for some fun and escape from their trying circumstances back home. We volunteered, and counselors introduced us to the youngsters. We helped them unpack and played games.

Hours before arriving in Efrat, we'd attended the funeral of Yehonatan Einhorn, 22, a staff-sergeant in the paratroopers corps. We didn't know him, but radio announcements of his death in battle and of the 1:30 p.m. funeral drew us to the Mt. Herzl Military Cemetery. Then, on Tisha B'Av morning, we drove to Herodion, the volcano-like palace of King Herod, before reaching Jerusalem's Old City.

We walked that stiflingly hot afternoon through the quiet Jewish Quarter, its shops mostly shuttered for the holiday. Children played and adults chatted in an open plaza whose spokes of stone-paved alleys housed new neighborhoods atop the shattered foundations wrought by Jordan's rule from 1948 to 1967. I rested briefly in the shade, then we walked down the steps leading to the Western Wall.

Ahead loomed the Temple Mount. Precisely 1,936 years earlier, I realized, the Romans had demolished the Temple, smashed the holy vessels, set fires, murdered Jews and captured the rest as slaves, and marched the golden candelabrum toward Rome in mockery and triumph, a scene depicted in bas relief in Rome's Arch of Titus that's still visited by locals and tourists.

But on this August afternoon in Jerusalem, the anniversary of desecration and destruction and diaspora-driving, the Jewish nation was back. Thousands of Jews streamed toward the Western Wall, which draws visitors around the clock every day. "How the city sits solitary, that was full of people," the Book of Lamentations begins plaintively. Now, the verse's fifth, sixth, and seventh words evaporated in the clamor of a nation restored, its nightmare overtaken.

So, was this a victory? Hardly. The calamities deriving from exile can't be undone. The millions of people killed in the Diaspora's persecutions, inquisitions, Crusades, pogroms, blood libels, Easter-Sunday Passion plays encouraging massacres, the Holocaust, Arab governments-inspired attacks in the 1940s and '50s - those Jews are gone forever, as are their never-to-be-born descendants. Had the temples remained standing, had the invaders and haters let us be, Jews living in Israel today would number in the hundreds of millions, rather than 6.5 million.

Observing the crowd, I pondered past and present. I was thirsty and hungry from having fasted since the previous evening. My head ached. This was a coming-of-age moment: a personal-national awakening, not a personal-religious one. The 2006 anniversary succeeded by overlaying the past upon the present. Since then, I've fasted on Tisha B'Av to connect with my ancestors' fasting-their suffering and yearning for redemption-between 70 C.E. and Israel's re-establishment in 1948.

And I fast because I know that my sons, now 23 and 22, are fasting. They served in the paratroopers corps of the Israel Defense Forces.

Hillel Kuttler's feature articles have appeared in The New York Times , The Washington Post , and The Wall Street Journal . He can be reached athk@HillelTheScribeCommunications.com.