As for where he gets his hard-working, never-give-up attitude, Rifkind attributes much of it to being the son of a Holocaust survivor. 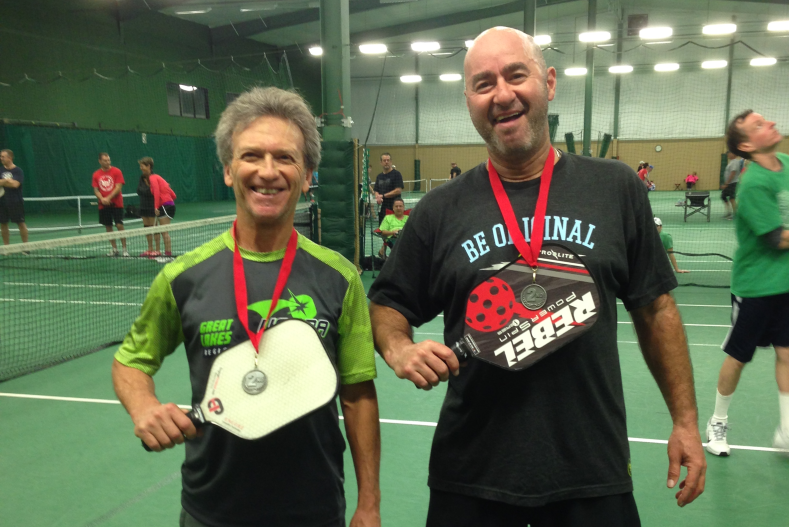 When Seymour Rifkind was 16 years old, he built parallel bars in the backyard of his Skokie home so he could practice more. As the concrete dried, he had the idea -- or some might say the chutzpah -- to etch into the cement that in two years' time, he would become the 1969 parallel bars and all-around state champion.

"Little did I know how much of an impact that would have on the rest of my life," Rifkind said. "Because when you write your goals down and you share them with others, that gives you additional motivation to do whatever you have to do in order to attain them."

Finishing high school as a state champion set a tone for many other future accomplishments for Rifkind. He won a gold and bronze at the 1969 Maccabiah Games; he coached over 40 all-Americans and a handful of Olympians; he finished the Chicago, New York, and Boston marathons. Today, he's one of the world's biggest advocates of pickleball, the fast-growing paddle sport that combines elements of tennis, badminton, and table tennis.

"I never really thought I'd find anything that gave me that same kind of thrill (as gymnastics) where I just was just totally 100 percent immersed in it," Rifkind said, "and here, in my senior years, I find pickleball."

Rifkind has always been an athletic thrill-seeker. He's a black belt and instructor in Tae Kwon Do and has completed an Ironman triathlon, 50K ultra-marathon and the Badwater 135-mile solo ultra-marathon (about which he made a documentary). Now in his 60s, he has become an international medal-winning pickleball player and instructor.

As for where he gets his hard-working, never-give-up attitude, he attributes much of it to being the son of a Holocaust survivor.

Albert Rifkind was one of few survivors in his family. He lost his older and younger brother -- the smarter, better, nicer brothers, Albert used to say -- and that racked him with guilt. Making his father proud naturally became a huge motivator for Seymour. His father told him many stories of survival, and the primary takeaway was that it wasn't usually the physically strongest who survived.

"I always prided myself on being mentally the strongest person out there, being able to focus, and being able to deal with pressure and things of that sort," Rifkind said.

Looking back, Rifkind also sees a common thread in his successes: strategic planning. For example, writing one's goals in cement.

"I recognized (being successful at gymnastics) wasn't going to happen accidentally -- you needed to plan," he said.

Rifkind said he practiced as much as three times a day and competed even while ill. "My attitude was you never make an excuse, you find a solution."

Rifkind has spent much of his life transmitting these values through coaching, and nowadays, he's coaching the coaches. In 2015, he founded the International Pickleball Teaching Professional Association (IPTPA) and travels all over the world creating professional standards for pickleball instruction.

Oddly enough, Rifkind's lifelong support for the Chicago Bears led him to pickleball. Four years ago, he was traveling to see the Bears play at different stadiums across the country when some friends introduced him to the sport.

"Five minutes on the court and I was hooked," he said.

Rifkind said he played for as many as five hours a day at first, but in wanting to learn more and improve his game, he discovered there were no coaches.

At the 2015 pickleball nationals, Rifkind convened the game's top players and formed the IPTPA. The idea is to teach teachers properly to expand the number of athletes all over the world and eventually get pickleball recognized by the International Olympic Committee. Rifkind, ever the strategic planner, says pickleball is about 12 years away from the Olympics.

Rifkind finds his new purpose rather fitting. "Life, for me, made a big circle," he said.

When he's not traveling the globe, Rifkind calls Riverwoods home, but you're more likely to find him at the River Trails Tennis Center in Arlington Heights, home of the Chicago area's premier pickleball program -- which, of course, he started.