Two Reform synagogues in Highland Park merged into one, called Makom Solel Lakeside, with festivities including a Torah procession. 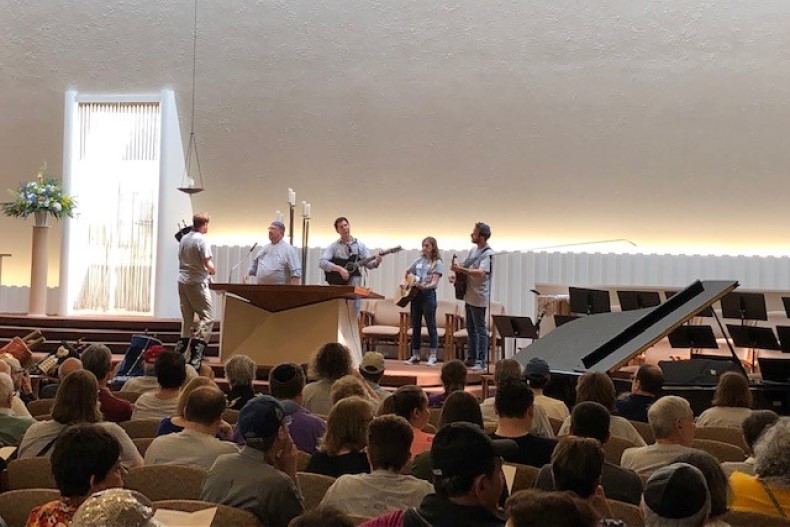 Congregation Solel and Lakeside Congregation for Reform Judaism joined together to form one congregation, Makom Solel Lakeside, in early June.

The new congregation, whose name combines elements of the previous synagogues and a goal to create a spiritual home--a makom --for its members, is led by Rabbi Evan Moffic from Solel and Rabbi Isaac Serotta from Lakeside.

"Our congregations have similar strengths but also complement each other," said Moffic. "We wanted to explore how we could better serve the community. We both are strong and stable enough that we would make an even stronger whole."

The two Reform synagogues, each about 60 years old, voted "overwhelmingly" last year to join together and create a single, strong synagogue. "The merger reflects our vision of how to best serve the Jewish community in the North Shore for the next 50 years," Moffic said. "This decision reflects our strengths, our potential, and a path-finding, bold idea."

The big day, June 2, began with a mitzvah project and a prayer service. Afterwards, members of both synagogues joined together to bring the Torahs from the Lakeside Congregation to Solel's building, which was deemed to be more suitable to house the merged congregation thanks to its size and capacity to hold the Torahs and other religious objects from both congregations.

Witha, according to Moffic, at least half a dozen people in their 90s and at least a dozen under age 5, the procession brought together a vibrant community of multiple generations, including new and founding members alike. As the crowd of hundreds passed through the streets, it was a "tremendous day for the Jewish community and the city of Highland Park," Moffic said.

"The coming together of our two congregations is a wonderful time in this community," added Serotta. "We have opportunities as a team to do things that we couldn't do when we were stuck in our own silos."

To learn more about the new synagogue, visit mymakom.org .