Emma Lookatch's bat mitzvah was a milestone for her and an important step on the way to inclusivity of all learners. 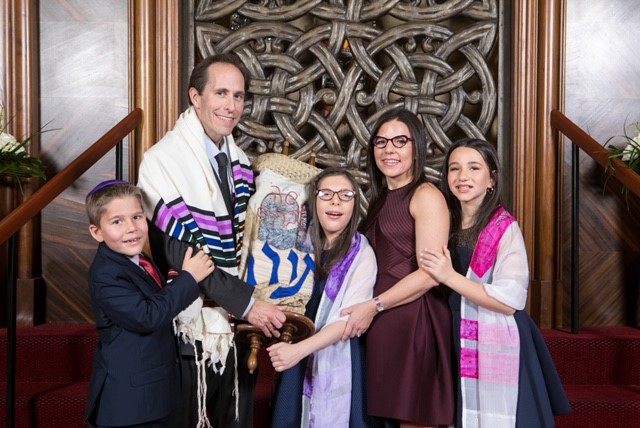 Emma Lookatch holds the Torah, surrounded by her family, at her bat mitzvah.

Emma Lookatch's recent bat mitzvah was a cause for celebration for more than one reason: Lookatch, who has cerebral palsy, got to celebrate her special day in a way that was meaningful to her, her family, and the congregation.

Beginning in kindergarten, where she had an extra madricha (teaching assistant) in her weekly Hebrew school, Lookatch was supported throughout her Jewish journey by clergy and staff at Temple Sholom of Chicago. "They didn't have a program [for students with disabilities], but we carved a way for Emma to do everything to the best of her ability in Hebrew school," said Lookatch's mother, Pam. "For the bat mitzvah, they really worked with us the whole way through to get her to be able to be as successful as she was."

These accommodations began in fifth grade, when Lookatch started studying for her bat mitzvah, and learned prayers before the rest of the class. In sixth grade, she was able to reinforce her knowledge in the general class. Lookatch studied her Torah portion, Haftarah , and prayers like V'ahavta and Ashrei by listening to music, for which she has a great memory. She also had a study buddy thanks to sharing her bat mitzvah with her younger sister, Samara.

"She did the same three aliyahs as her typical peers," Pam said. "The cantor was great about letting her do as much or as little as she wanted to, but challenged her to do what typical kids do."

As for the shared service, "Samara was my best friend" as she prepared, Emma said, and for Samara, she had the opportunity to understand the magnitude of studying through her eyes as well as her sister's.

"It's really special that they got to share it together; they have a newfound relationship and closeness that they didn't have before," Pam said.

As the big day got closer, Lookatch and her family did a series of rehearsals in the synagogue's sanctuary. During these rehearsals, they ran through the service many times and figured out how different elements of the service would work. Certain physical parts of the service, like carrying the Torah and ascending to the higher bimah (pulpit), needed to be reconsidered in how to help Lookatch do the best she could.

One of the highlights of the day was Emma's d'var Torah (bat mitzvah speech), which she wrote with the rabbi like her typical peers. Her Torah portion included Jacob's dream, and she equated his dream to some of the challenges in her life.

"When [Emma] called me at the last meeting to hear it, the rabbi said they have to discuss who reads it for her and [Emma] said, 'I'm going to read it,'" Pam recounted. During the service, her father, Bryan Lookatch, helped her balance and turned the pages as she delivered her message.

In the past, a story like Lookatch's might have been unique, but nowadays, organizations like JUF, JUF-supported JCFS Chicago, and more are determined to ensure that kids like Lookatch can fully participate in Jewish life.

"JUF has invested in work to make our synagogues and congregations more inclusive of people with all types of disabilities," said Jodi Newmark, director of JUF's Encompass, which forges partners with service provides to provide support to adults with disabilities.

The Chicago Synagogue Inclusion Project, which was funded by a JUF Breakthrough Fund grant, is designed to help the one in five people in the United States diagnosed with a disability to fit in in their synagogues and religious life. The project began with a report based on "listening tours," focus groups, and surveys sent around the community to identify current strengths and weaknesses in synagogues' approaches to helping congregants with disabilities feel welcome, eventually concluding that all synagogues value inclusion, but many don't know how to begin to be more inclusive.

Since the report's release, JCFS Chicago professionals have provided training to eight local congregations and JUF and Encompass provided mini grants to 14 congregations for a variety of inclusion projects.

"With this work," Newmark said, "today it is becoming a realistic expectation that [stories like Emma's] can and should be the rule and not the exception for students of all abilities."