From Chicago to Bulgaria—to the Olympics? 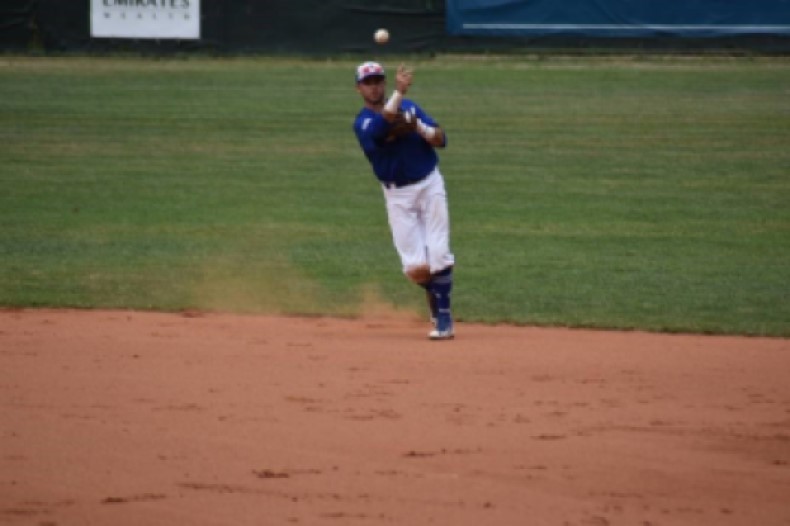 Chicago’s Mitch Glasser, playing second base on Team Israel. The team just swept the first round of play, held in Bulgaria, leading up to a possible slot in the 2020 Tokyo Olympics.

Growing up, Mitch Glasser would play baseball with his grandfather in their backyard in Highland Park. Back then, he probably never dreamed he'd someday be playing ball with an Israeli team in Bulgaria, which is where he found himself earlier this summer.

There, he played at a park in the lush green mountains of Blagoevgrad, an hour's drive south of Sofia, Bulgaria's capital. "There is a beautiful ball field tucked in a small valley with trees surrounding the field…with beautiful views in all directions," he said. "The Bulgarian team did a fantastic job keeping it playable even after a monsoon-like downpour in the mountains."

Glasser traveled to Bulgaria with Team Israel, the country's national team. On the road to the 2020 Summer Olympics in Tokyo, Team Israel played the European Championship B-Pool in Blagoevgrad.

The team swept the series, undefeated. They trounced Greece (14-7, including a homer by Glasser), and Serbia (11-1, including a grand slam by Glasser). They also took on Croatia and the Bulgarian home team.

Their hardest win came against Russia; the tie score of 8-8 pushed the game to extra innings. Russia scored 4 runs in the top of the 10th inning. But in the bottom, Israel rallied with 5. Glasser doubled-in runs, then made the walk-off run that put the game in Team Israel's win column, capping the game at 13-12.

Growing up on the diamond

As a boy, Glasser attended grade school at what is now Bernard Zell Anshe Emet Day School, played in the Windy City Wildcats little league, and then played high school baseball for the Latin School of Chicago. He spent summers playing for Top Tier Baseball. He went on to play college ball at Macalester College in St. Paul, Minn.

Post-college, he was drafted by the Chicago White Sox, as an infielder for spring training and rookie ball, before being released a short time later. He moved into the minor league system, spending a summer in North Carolina working behind the scenes for the White Sox Class A affiliate.

"I was working with many of the coaches and players I had played with the previous season, learning what it takes to develop professional baseball players. But my manager, Pete Rose, Jr., encouraged me to return to playing, saying: 'Why are you wearing khakis and a polo every day [on the sidelines], when you should be wearing a uniform?'"

Nowadays he's back on the field. Glasser first played for Team Israel two years ago, when they finished sixth in the 2017 World Baseball Classic, as chronicled in the documentary Heading Home .

This time around, Glasser has been on loan to Team Israel from the first-place Sioux Falls (SD) Canaries, of the American Association of Independent Professional Baseball (AAIPB). He plays infield and is their hitting instructor. He previous played for several other AAIPB teams across the US.

Approximately half of Team Israel's members live in Israel and half are from various places across the U.S., according to Glasser. Some of his teammates played on the World Baseball Classic team; Blake Gailen is on the Dodgers Triple-A team as an outfielder, while Corey Baker pitched on the Cardinals Triple-A team.

"Shlomo Lipetz and Dan Rothem are two of the most veteran Israeli-born players." Glasser said. "They have represented Israel in national competitions for over 20 years. Lots of Hebrew encouragement is yelled from the dugout and field, a lot of 'Yallah!' ['let's go!']  and 'Ach Sheli!' ['my brother!']."

By winning this European tournament, Team Israel moves one step closer to the Olympics. Next comes a three-game series against Lithuania later in the summer. After that, the action moves to Parma, Italy in late September for the Olympic-qualification round.

When Team Israel defied the odds at the World Baseball Classic, they were compared to the Jamaican Bobsled Team, Cinderella, and David defeating Goliath. Who knows what metaphors will be employed as they advance toward the Olympics next summer.