Bringing to light the Lodz Ghetto photographs of Henryk Ross 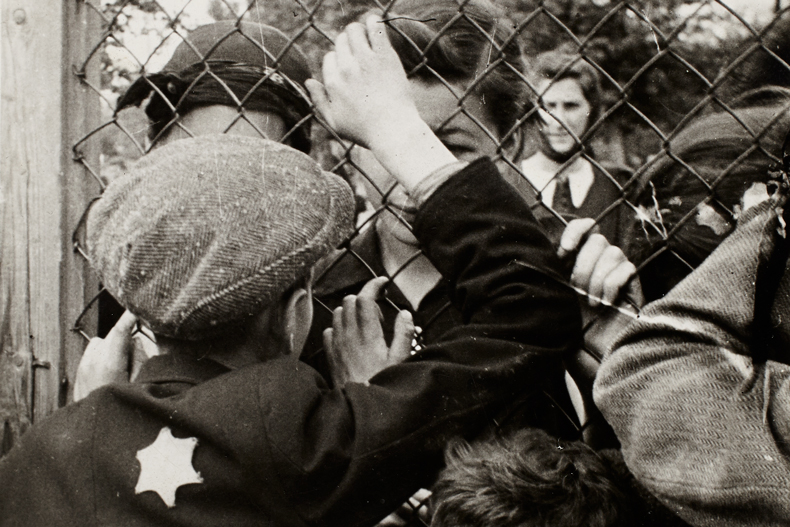 Children talking through fence of central prison on Czarnecki Street prior to deportation, 1940-1942. Photo credit: Henryk Ross. © Art Gallery of Ontario, Gift of the Archive of Modern Conflict.

During the darkest days of the Holocaust, the Lodz Ghetto in Poland was home to one of the largest remaining communities of Jews. Now, the Illinois Holocaust Museum & Education Center is bringing this lost world to life in Chicago for the first time.

Soon after Germany invaded Poland in 1939, they entered the city of Lodz, which was then home to Poland's second largest Jewish community. Jews were banned from most professions and forced to wear a yellow star. Within weeks, over 160,000 Jews were forced to move into an area measuring just one and a half square miles; later on, tens of thousands of Jews from other from other parts of Europe were forced into the Lodz Ghetto, too.

One of the Jews imprisoned in the ghetto was Henryk Ross, a 21-year-old who'd worked as a sports photographer for a Warsaw newspaper. In the ghetto, he was assigned the job of official ghetto photographer, taking pictures of workers for their factory IDs and shooting carefully controlled propaganda photos.

In addition to performing his official duties, Ross risked his life to resist the Nazis, shooting thousands of photographs that showed what life was truly like in the Lodz Ghetto. He hid his camera underneath his coat and cut holes in his pockets so he could manipulate his camera unseen, and roamed the ghetto, single-minded in his determination to record as many images as he could for posterity. Ross' wife Stefania, whom he married in the ghetto in 1941, assisted him, risking her life to serve as a lookout, helping him evade Nazi guards and ghetto police.

The Nazis set up factories and workshops in the Lodz Ghetto, and made a grim promise: Jews would stay alive there so long as they worked. For years, despite thousands of Jews being deported from the ghetto to be murdered in Auschwitz and elsewhere, a community of Jews somehow found the strength to continue living. By 1944, the Lodz Ghetto was one of the last remaining communities of Jews in Europe, with a population of about 75,000 Jews.

Today, Ross' photos document this lost world. He captured tender family portraits and lighthearted moments of children playing, young lovers flirting, and grandparents caressing their grandchildren. He also chronicled the excruciating labor and living conditions that the Jews of the ghetto endured. Approximately 20% of the Jews imprisoned in the ghetto died of starvation and disease. Posing for Ross' photographs was these Jews' way of defying the Nazis, allowing a record of their suffering and their lives to be recorded for posterity.

Ross took photos of Jews writing notes to their families before they were deported, of children waiting to be sent away on transports to certain death, of Jewish workers performing backbreaking labor while they were emaciated and barefoot.

Ross also captured rare images recording Nazi brutality and murder. On one occasion, he managed to spend all day hiding in a warehouse, watching as Nazis forced Jews into train cars bound for Auschwitz. At Adolph Eichmann's trial in 1961, Ross' photographs and testimony provided proof of the Nazis' crimes.

"He resisted the Nazis only way he could, given his situation," said Arielle Weininger, Chief Curator of Collections and Exhibitions at the museum. The Lodz Ghetto was liquidated in 1944, and almost all of its remaining residents were sent to their deaths in Auschwitz. Ross buried his precious negatives: "I wanted to leave a historical record of our martyrdom," he later recalled.

Miraculously, both Henryk and Stefania survived the war. They moved to Israel, bringing their precious negatives with them. Now, 300 of these images will be displayed at the museum, offering visitors a rare glimpse into the lost world of the Lodz Ghetto.

Visitors will also be able to hear music that was written and performed in the Lodz Ghetto by Yankele Hershkowitz, a young tailor who was imprisoned there. He wrote new lyrics to Yiddish folk tunes, parodying and commenting on life in the ghetto, and became known as "the bard of Lodz." His songs entertained and gave hope to thousands of Jews during the Holocaust.

Two versions of Hershowitz's songs are featured in the museum: some versions recorded by the international klezmer band Brave Old World, and also renditions by Yaakov Rotenberg, a Lodz Ghetto survivor, who recalled listening to them while incarcerated in the ghetto.

Yvette Alt Miller, Ph.D. lives with her family in the northern suburbs of Chicago.