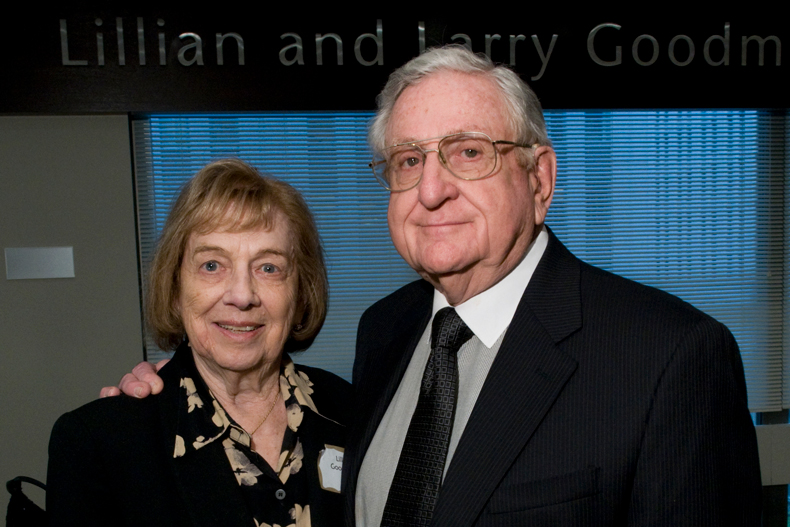 Lawrence and Lillian Goodman at the opening of the Lillian and Larry Goodman Conference Center at JUF headquarters in 2008. Photo credit: Robert Kusel.

Lawrence "Larry" Goodman often saw potential where others did not. He turned army surplus goods into a small retail empire. He believed in the future of the modern state of Israel, even its desert. He thought a science fiction series from his childhood could spark an interest in space exploration for the youth of his day. He even believed that some good could come out of a family tragedy.

In 1946, Goodman began selling army-surplus items, then expanded his inventory, creating Community Discount Stores, the forerunner of today's self-service discount department stores. By the time he sold the chain 17 years later, he had grown it to 35 stores.

Goodman then established the Goodman Group and, in 1965, American Asset Management Services, a real estate company that owns and operates shopping centers and office buildings. Always eager to foster the potential in others, he sat on the Advisory Board of the University of Illinois at Chicago Business School, and was named to that university's Chicago Area Entrepreneurship Hall of Fame.

Born and raised in Chicago, Goodman attended Herzl College and DePaul University in Chicago, and the University of North Dakota. He then served as an Army Air Corps navigator during World War II.

While home on furlough at age 19, he married his high school sweetheart Lillian Wool, then 18. Over only a couple of years, they were stationed at 12 different military bases. After his service, the Goodmans settled in Highland Park, but never stopped traveling. During their 66-year marriage, they circled the globe twice. They visited Jewish villages in Ethiopia, and protested on behalf of Soviet Jews in Moscow itself.

Naturally, Israel was high on their list of destinations. Goodman traveled there nearly 60 times, starting in 1958. Back home, he advocated tirelessly for the Jewish state, serving as Midwest regional chairman for Israel Bonds, on the board of the Development Corporation for the State of Israel, and as both president and chairman of the America-Israel Chamber of Commerce.

The Goodmans have also supported Israel's soldiers in many ways, funding an exercise facility, a Torah scroll, and a system for them to earn scholarships through community service.

Passionate about exciting the next generations about Israel, Goodman supported the teaching of modern Israeli history at JCC Camp Chi and at JCC camps nationally, and sponsored teen trips to Israel.

While concerned with all of Israel, Goodman agreed with David Ben-Gurion about the enormous potential of its Negev region and its "capital," Be'er Sheva. Goodman founded the American Friends of the Be'er Sheva Foundation and served as its national chairman. The Goodmans enhanced the city's arts, social services and hospitals, and public recreation. For all his efforts, he was honored by the city with its Distinguished Citizen Award for Lifetime Achievement.

Goodman also served on the board of governors of the city's Ben-Gurion University and enhanced its infrastructure. The university awarded him an honorary doctorate.

Many of Goodman's efforts have been channeled through the Lillian and Larry Goodman Foundations, but he also served on the boards of many other institutions.

In Chicago, Goodman sat on the Board of Trustees of Illinois Holocaust Museum and Education Center. Goodman was also active at North Shore Congregation Israel, and many other Jewish institutions. Goodman served on the board of American Jewish Joint Distribution Committee, traveling to former Soviet republics and Latin America on its behalf.

Goodman also served on the JUF Board of Directors.  "Larry exemplified the ideal of commitment to the Jewish community and Jewish causes," said Lonnie Nasatir, JUF President. "We appreciate his generosity every day at JUF, and even hold meetings daily in the Lillian and Larry Goodman Conference Center in our headquarters."

Following the passing of his granddaughter, Cebrin, he created the Cebrin Goodman Center, with the hope of saving others from drug addiction.

Many Chicagoans knew Goodman from his Sunday morning TV appearances. He was the first department store TV advertiser, and his commercials were live. He sponsored- and hosted- broadcasts of the 1930s Flash Gordon serial and his own Outer Space Quiz Show .

Memorials may be made to the Greater Chicago Food Depository, the Illinois Holocaust Museum and Education Center, or the American Friends of the Be'er-Sheva Foundation.