Cooking from one generation to the next: it's endless 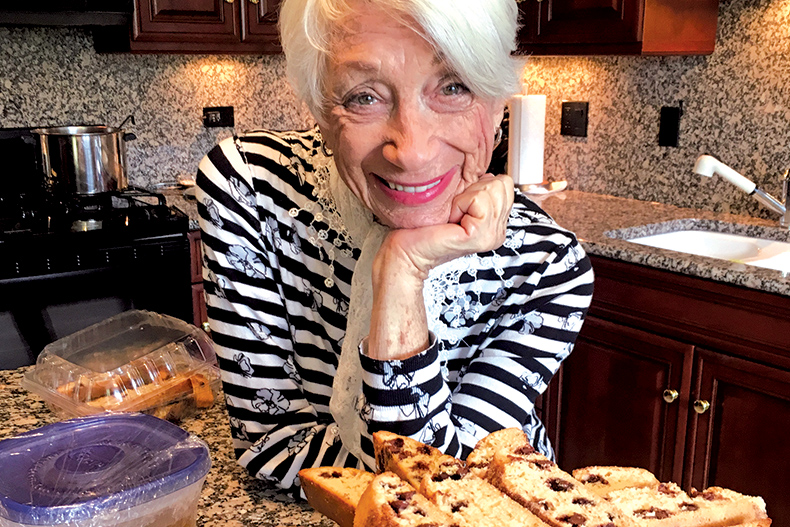 To say that Jews have a special relationship to food is, at the end of 2019, a yawn-out-loud fact, if not an overcooked cliché.

But for Chicago native Marlene Levin, 86, memories of steaming bowls of matzoh ball soup and platters of succulent brisket with a spicy kishke and sweet kugel represent more than nostalgia for the days of Bubbe's gut-splitting, comforting, food-equals-love meals.

In Levin's family, food was, first and foremost, a business.

Levin's mother, Dora "Rae" Perry Endless, was among the first glatt kosher caterers to assume management of the food and beverage service at some of the city's finer establishments-most notably, beginning in the late 1940s, at Lincoln Park's Belden-Stratford, where her business, Endless Catering, ran all of the residential hotel's kitchens for more than a dozen years.

An all-around excellent cook and savvy businesswoman, Dora Endless oversaw thousands of meals that, Levin said, often started with a fresh fruit cocktail and salad, moved on to a chicken Kiev main course with kishke, kugel , and tzimmes on the side, and culminated in her mother's famous dessert tables of strudel, rugelach, teiglach , honey cake, sponge cake, and fresh fruit.

Though she was too young to work-Levin was still at Von Steuben High School, in Chicago's Albany Park neighborhood, when Endless Catering began its relationship at the Belden-Stratford-the older Endless siblings and their father, Harry Endless, all became part of the family business.

"Two of my sisters, Anne Strouse and Norma Ripes, helped my mother, and my brother, David Endless, who went on to manage the kosher food and beverage at the Holiday Inn in Evanston and at the Jewish Covenant Club of Chicago, got his start working for my mother," Levin recounted.

Even Harry Endless, a beloved North Side shoemaker, got into the act.

"My father was the kishke stuffer," said Levin, a former corporate event planner who worked for a few years with her brother.

But it was clearly Levin's mother who ran the show.

"She was born way before her times," said Levin, of Dora. "Her intelligence was innate, as was her ability to relate to people … My mother turned American when she put her feet on the soil [of the United States]."

Dora immigrated to America with her family around 1916, when she was 11. She grew up, like so many of Chicago's Jewish immigrant community, on the city's West Side.

"My mother's story was just like Fiddler on the Roof ," said Levin, explaining how the Perry clan was kicked out of its Russian shtetl by the tsar's armies.

Dora, the eldest of six in her family, learned to cook from her own mother, Levin's maternal grandmother, who also was an excellent chef and baker. Pretty soon, Dora was catering parties and dinners for friends and neighbors in the Douglas Park neighborhood, where the Endless family initially settled.

Dora Endless' reputation was well established by the time that Harry Katz, then a co-owner of Belden-Stratford, approached her to take over the catering at the hotel. She'd already opened and run a glatt kosher kitchen at a hotel on the city's South Side.

Levin said that the legacy of her mother, who died in 1971 at age 76, extends well beyond her business acumen. She helped start the Douglas Park Day and Night Nursery for Jewish children orphaned during the Great Depression. Even after she had moved to the North Side, she remained committed to the organization, serving on its board in many capacities over the years, including as president, and becoming one its most tireless fundraisers.

"She was simpatico with all of the kids," said Levin. "There were a lot of orphans in her own family."

The other significant legacy that Dora Endless passed along was a passion for feeding others. Her daughter, Levin, the only surviving Endless sibling, continues to exemplify it.

Those invited to Levin's condominium in Highland Park, where she lives with her husband of 65 years, Joe, 89, may be greeted with a tower of freshly baked mandelbroit and a cauldron of homemade, just-off-the-stove chicken soup.

Levin has also transmitted her love of cooking to her own daughter, Ellen Robinson, of Deerfield, and is introducing some of the Endless family traditions to her grandchildren-Ellen's children and those of her son Neal, an Evanston attorney.

"My mother always said, 'The difference between a great cook and a good cook is the great cook will not take any shortcuts,'" said Levin, who honors her mother's admonitions against taking the easy way out.