An achievement of Talmudic proportions

Chicago celebrates a milestone over 7 years in the making 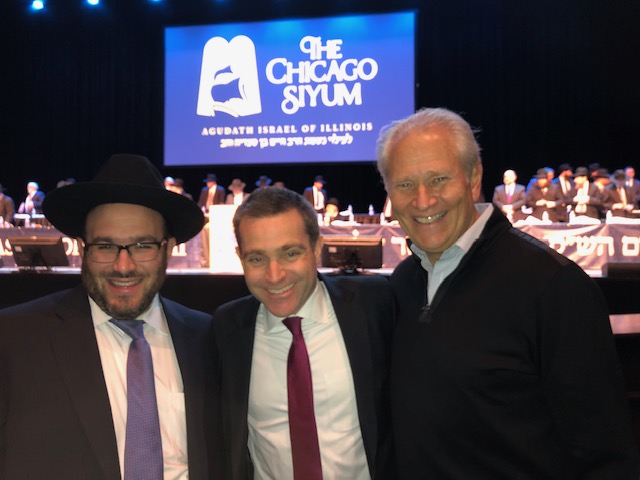 Reading a parsha, or portion, a week, it takes a year to complete reading the Torah, after which we celebrate with the holiday of Simchat Torah.

But the Talmud is much, much longer. To enable more people to study it completely, a practice was established in 1923, called "Daf Yomi" or "A Page a Day." At that rate, reading and studying each of the Talmud's 2,711 pages still takes more than seven years. There is a celebration after that, too, called a siyum, from the Hebrew word for "completion."

And, on Jan. 5, Chicago celebrated a Daf Yomi siyum. Similar celebrations were held in other cities worldwide, marking the 13th time the Daf Yomi cycle has been completed and restarted.

Chicago's celebration of the siyum- the culmination of a weekend of events that took around Chicago- was held at the Rosemont Theatre. It was attended by the hundreds of Daf Yomi "graduates," as well as some 3,000 family and community members .

One was JUF Board Member Elliott Robinson, who both helped plan the siyum and helped found the Daf Yomi class at Skokie's Congregation Or Torah 17 years ago. Robinson called this year's siyum a "planetary party."

Altogether, as many as 1 million people celebrated the siyum globally, estimates Rabbi Shlomo Soroka, of Agudath Israel of Illinois which  spearheaded Chicago's siyum.

"I found it incredibly inspiring to walk into a packed room of thousands who were celebrating the strength and conviction of their Jewishness," said JUF President Lonnie Nasatir, who attended Chicago's siyum. "At a time when our community is understandably feeling vulnerable, this event was a powerful reaffirmation of our commitment to our Jewish values and identity."

"Every Jew should celebrate the completion of this incredible journey," said Robinson. He has participated in Daf Yomi sessions in many locales worldwide,  including Gibraltar, and "of course, Israel."

The objective of the Daf Yomi remains the same as it was when it began nearly 100 years ago: to make sure that, at least in this way, Jews around the world remain "on the same page,"  literally.

""Every Jew should celebrate the completion of this incredible journey." - Elliott Robinson "