The mood in Chicago’s Daley Plaza was bittersweet June 23, as some 500 Chicagoans gathered to show support for captive Israeli soldier Gilad Shalit. 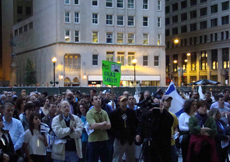 Some 500 people attended the vigil in support of Gilad Shalit.

The mood in Chicago's Daley Plaza was bittersweet June 23, as some 500 Chicagoans gathered to show support for captive Israeli soldier Gilad Shalit.

The crowd was somber, noting Shalit's years in captivity, but also prayerful for his safe return to his family.

The candlelight vigil Light the Night for Gilad Shalit was held on the eve of the fifth anniversary of Shalit's abduction from Israel by the terrorist group Hamas. On June 25, 2006, Shalit—then a 19-year-old soldier in the Israel Defense Forces (IDF)—was attacked while guarding a place called Kerem Shalom (Vineyard of Peace), one of half a dozen border crossings between Israel and Gaza. Contrary to international law and all standards of decency, the kidnapped soldier also has been held virtually incommunicado, with no right of visitation by any humanitarian body.

In his opening remarks, Oren Dekalo, Vice Chair for the Jewish Community Relations Council of the Jewish United Fund of Metropolitan Chicago (JCRC), thanked the crowd for attending and asked everyone to contemplate all Gilad has missed out on in the past five years.

"I'd like us to take a moment and pause," he said. "Consider some of the life events we've either experienced ourselves or shared with others over the last five years—birthdays, weddings, graduation ceremonies, children being born. Even some of the more mundane parts of life— trips taken, movies seen, books read. The world has changed greatly in its last five years. It is truly a different place than back in 2006. It is now half a decade later and Gilad is still captive. Let us pause and think about what it must be like for Gilad and his family to miss out on the past five years."

The Honorable Orli Gil, consul general of Israel to the Midwest, asked vigil participants to put themselves in the place of Shalit and his family. "Mothers in Israel and everywhere can relate with Aviva Shalit," she said. "Imagine yourselves in a cell alone for a day, a month, a year. It's cold in the winter and almost unbearably hot in the summer. Gilad has remained in the same place."

Gil also explained why his freedom is so important to the state of Israel. "Every soldier leaves behind a mother and father. Gilad has become the symbolic son for all Israelis. We all feel the pain of his family, because all Jews are responsible for one another," she said. "Let us hope the Shalit family is strengthened tonight by the solidarity from Chicago."

"It is a great honor for me to be part of this very moving get together," said The Honorable Graham Paul, Consul General of France speaking on behalf of his country. "Israeli soldier Gilad Shalit is also a French citizen," he said. "Our message today is that we will not forget Gilad Shalit and we will continue to fight for his immediate liberation. Our resolve remains stronger than ever. Our message today is that Gilad Shlait must be released unconditionally."

Alderman Debra Silverstein (50th ward) also addressed the gathering. "It is humbling to be surrounded by so many people who came here for such a worthy cause," she said. "My prayer is next year we come together to celebrate his return."

The evening included a prayer for the safety of captive soldiers led by Rabbi Carl Wolkin, president of the Chicago Board of Rabbis, a poem read by Betsy Katz from the American Jewish Committee, and a powerful rendition of Oseh Shalom sung by the Shireinu Choir from Anshe Emet Synagogue.

The vigil was attended by community members of all ages. Tamara Cohen, a student at Ida Crown Jewish Academy, in Chicago, attended the vigil with friends. "I came here because I feel it is really important," she said. "Every day at school we say a special prayer for Shalit and I feel really connected to him and to Israel."

Shiva Bradley is from Chicago, but lived in Israel for 18 years. Though she worries about whether Gilad is still alive, she came to rally because she is, "a supporter of all Israeli things, and definitely this."

Michael Szanto was there to show solidarity with Shalit. "We need to rescue him from his captivity. His treatment is horrible and it's an act of terrorism and we need to stand up to the extremist just like we did in World War II," Szanto said.

Yunit, a 9-year-old student at Chicago Jewish Day School attended the vigil with her father. "I'm here to support Gilad Shalit and his family," she said. Aton, 11, summed it up best with, "I just want this guy free. "

Steve Dishler, director of International Affairs of JUF's Jewish Community Relations Council (JCRC), concluded the nights program by asking everyone to "continue showing your compassion for Gilad by talking about Gilad to family and friends," he said. "And by urging your member of Congress to sponsor House Resolution 317, introduced this week through JUF's urging by Rep. Dold of Illinois and Rep. Ackerman of New York."

View the full resolution and send a letter to your member of Congress.

The candlelight vigil was sponsored by JUF's Jewish Community Relations Council with JUF's Young Leadership Division, Consulate General of Israel to the Midwest, AIPAC, the American Jewish Committee, the Anti-Defamation League, Chicago Board of Rabbis, Friends of the IDF, and Israel Bonds.