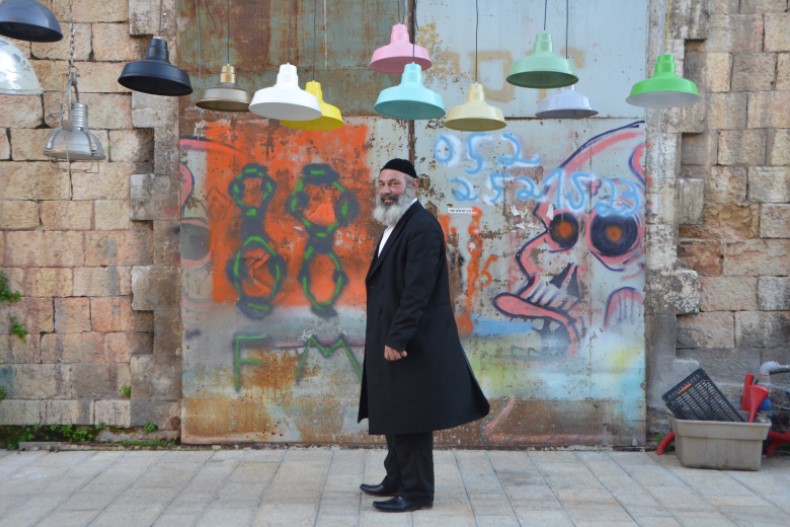 “And so Ibrahim Yassin, the Shia Muslim from Southern Lebanon, became Avraham Sinai, an ultra-Orthodox Jew from the holy city of Safed. God sure does work in mysterious ways.” Photo credit: Erez Kaganovitz.

"Hi, I'm Erez, I have a project called Humans of Tel Aviv where I take pictures and stories of people. Do you want to participate?"

This is how Erez Kaganovitz has introduced himself to over 1,000 strangers in Tel Aviv for his project, which is based on the popular Facebook page "Humans of New York." As part of the project, he takes photos and conducts short interviews with these strangers to construct a living portrait of
the city.

"It's all about the attitude and the way you approach people," said Kaganovitz, whose warm and friendly manner is contagious. "In Tel Aviv," he said, "people are flamboyant and want to talk. And if you come in a humble and generous way, people will open their hearts." Over the last seven years since he began, he has discovered a variety of stories from entertaining to life-changing.

JCC Chicago recently hosted his 36-piece photography exhibit called Humans of Tel Aviv at Bernard Weinger JCC in Northbrook. Up next, the public exhibition will travel around the Chicago metropolitan area throughout the rest of the year.

At a recent JUF lunch and learn event, Kaganovitz--a journalist and former parliamentary adviser for MK Michael Oren and MK Eitan Cabel at the Knesset--showed attendees a slideshow to help explain where he gets his inspiration. He tries to find something interesting to talk about before he approaches the person, whether that means a physical characteristic like a special tattoo, pair of earrings, or outfit, or an interesting juxtaposition of a person and their environment. He takes pleasure in finding the "unexpected" in people that defies stereotypes--one woman with particularly fancy nails who many audience members expected to work in a salon actually worked in a grocery store.

Even with "ordinary" people, Kaganovitz knows there's something interesting. "Everybody has a story to tell," he said, "and you just have to find the right key to unlock that story."

The other vital part of his work is taking a picture of each person he interviews. For some, the photo can make a story go viral, which happened with a picture of a woman holding a machine saw. The topic of her blurb: circumcision.

As Kaganovitz traverses the "urban jungle" of Tel Aviv meeting humans and dogs alike, he enjoys showing off the city's diversity in religion, expression, and more. While "trying to find contradictions," he has photographed the extremes of Israeli society in one place, including one photo of an Orthodox man walking past two teenage girls in tank tops and short shorts.

Kaganovitz's main motive for starting this project was to explore these contradictions, as well as educate the world about what Israel is really like. "I traveled all over the world, and when people realized I'm from Israel, I got a lot of assumptions about where I'm coming from," he explained. Inspired by "Humans of New York," he set out to show the "diversity, multiculturalism, vibrancy, and complexity" of his home city and help people appreciate the "real" Israel beyond what is usually shown on the news.

"I tell stories, not politics," he said, explaining that he lets each interviewee's words stand alone without giving them any labels. "When I let other people connect the dots for themselves," he said, the impact of his work reaches far--including comments from Tehran, Iran, which is often seen as an enemy of Israel. The stories of everyday people and the challenges they face can transcend the barriers of international relations.

"We all have our own problems, but it gives you a good perspective about life to see others overcome challenges," he said. "When you give people a good story and photo, people relate and connect," no matter where they're from.

As Kaganovitz continues to tell the "Israeli story and Jewish story" as a human story, he looks forward to meeting more people whose everyday stories can make a difference.

Find Humans of Tel Aviv at humansoftelaviv.co.il or on Facebook.

JCC Chicago will display Humans of Tel Aviv at the Peggy Notebaert Nature Museum during Shabbat on the Lake on July 12. The exhibit will then visit JCC Camp Chi.