CFJE's "Thinking Together: Communal Conversation on Jewish Education" focused on national ideas and local challenges in the field. 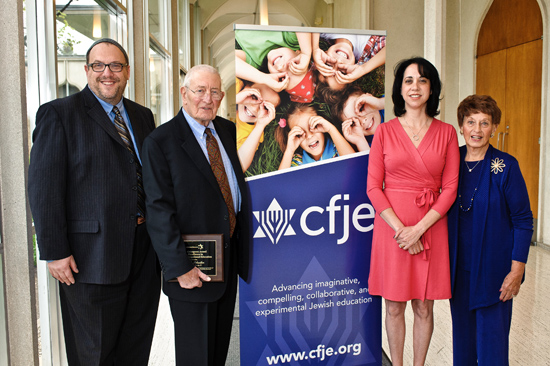 "What are we hearing from families about choosing Jewish early childhood education?" "What are common challenges and opportunities in congregational education?" "How do macro trends impact Jewish learning/life programming and choices?"

Some 150 educators, clergy, lay leaders, administrators and other stakeholders gathered May 10 to tackle these and other big questions, hear about innovation approaches from national experts, stimulate one another's thinking, and empower each other to effect change.

Convened by JUF's Community Foundation for Jewish Education, "Thinking Together: Communal Conversations about  Jewish Congregational and Early Childhood Education in Chicago" focused on national ideas and local challenges in the field, which engages nearly 8,000 students enrolled in 40 schools in the metropolitan area.

The participants began their day of learning and idea exchange with an overview of key data points relating to enrollment trends, capacity utilization, teacher compensation and professional development, funding and costs, and other vital information.

The data study was facilitated by CFJE and conducted by JData, a research program operated by Brandeis University with generous support from the Jim Joseph Foundation.

With information in hand, the conference participants broke into two interest groups, one focusing on early childhood education and another centering on congregational education. Both sessions offered case studies of innovative approaches and programs designed to address the challenges of engaging families and youth in Jewish education.

"The passion and energy in the room was unstoppable," said one participant of the interaction with other professionals.  "Although we have a long way to go [in advancing the field," said another, yet another educator stressed how "empowering [it is] being in the room with passionate Jewish educators."

Members of her congregational community described Guralnick as "understanding, perceptive, patient, and fun… Her support [for children and families] is unwavering, and her engagement with the children is constant and active."

The Pinsky Award honors Sue Pinsky, a Jewish educator who was instrumental in the founding of the North Suburban JCC. Her son, Mark Pinsky, and his wife, Lisa, generously established an endowment fund in Sue's honor to ensure the award in perpetuity through JUF's Agency Endowment Program.

CFJE also awarded its first annual CFJE-Grinspoon Foundation Award for Excellence in Jewish Congregational Education to Buddy Schreiber, who teaches at Am Shalom in Glencoe.

The award celebrates successful innovation in Jewish education and was awarded to Schreiber, in part for "the quiet way [he] impacts students…[and] his determined presence and desire to bring them a high level discussion about higher level ideas."

To learn more about the groundbreaking work of JUF's Community Foundation for Jewish Education of Metropolitan Chicago, visitwww.cfje.org.