The Peace Garden at the Holocaust Museum provides a place for visitors to find peace before and after an intense museum experience. 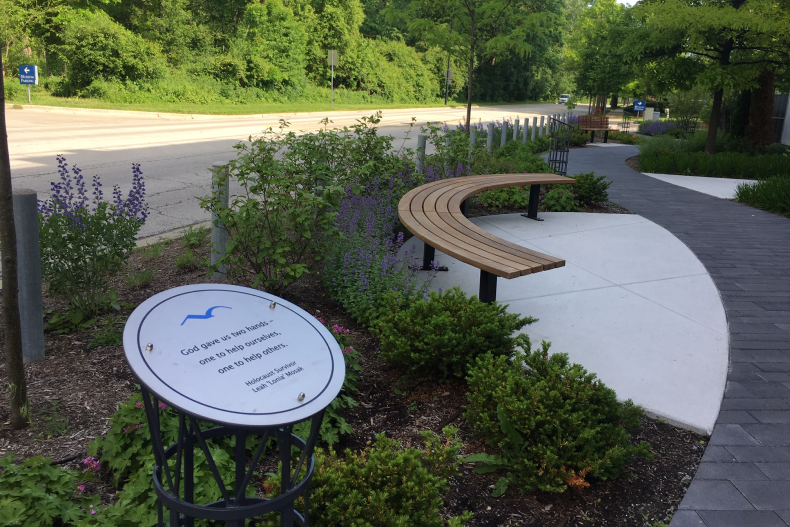 When visitors walk from the Illinois Holocaust Museum and Education Center parking lot to the museum building, they traverse a flower-filled landscape.

The Peace Garden, which was dedicated last summer, was designed to "welcome visitors and create a sanctuary for reflection after their museum experience," said the museum's CEO, Susan Abrams. "The concept of a Holocaust museum could be intimidating, so this keeps the theme and provides a welcoming experience as you begin or end your experience."

Visitors first encounter the "winding pathway through," filled with "a mix of some evergreens and many, many perennials, so from the start of early spring all the way through late fall, there is always something in bloom with a range of colors," Abrams continued. The garden also features four curved wooden benches along the path and signs to direct visitors to the museum.

When donors Harvey L. Miller and Steve Sarowitz pitched the idea to complement the museum with a tranquil exterior, Abrams quickly got on board. "The minute I heard the idea, it really resonated with me," she said. An advisory committee including staff, board members, and funders created a plan that took just over a year to create.

The idea of a garden holds particularly strong meaning for Sarowitz, who is a member of the Baha'i faith. "To me, the idea of gardens and peace go together. I felt that it would be a way to surround [and soften] the building and show the contrast between war and peace."

Sarowitz brought the architects from the Baha'i House of Worship in Wilmette on board, and together with the advisory committee, they created the design and chose five quotes representing speakers from different religions.

"One of my goals as a funder was to celebrate different religions and the beauty of all religions. Your own religion's quote doesn't have to be the 'best' one," Sarowitz said. "Religion is not a competition but a celebration, and it would be better to celebrate together. To get to peace, it's very necessary for the world to come to that same conclusion."

At the dedication ceremony last August, the Sisters of Story--a trio of Muslim, Christian, and Jewish storytellers--inaugurated the space with a strong message of communality and peace.

The hope is "to have the garden emanate peace and serenity, to have it be a silent teacher, and to give people a place to digest the complex message of the museum in a peaceful, meditative environment," Sarowitz said.

Miller, a longtime board member and donor to the museum whose contributions include multiple exhibits, sought similar beauty in the garden project. "I saw the garden as a visual that, as people are walki ng up to the museum, puts them in a better frame of mind. Then, once they have left the museum, if they have any thoughts that they want to share with their neighbor or the person they came with, the garden is a nice place to do it."