'The Lost Family' continues Blum's exploration of the lingering darkness of the Holocaust – and spices it with an assortment of mouth-watering recipes. 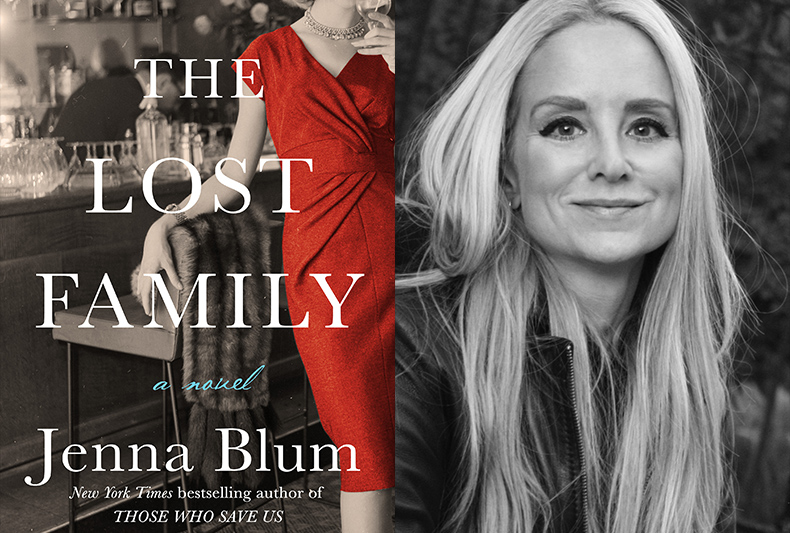 The numbers imprinted on the forearm may be the most visible reminder of the atrocities sustained by those who survived Hitler's death machines. Yet it's the hidden scars-guilt, shame, and despair-that can most hobble those who emerged from the ashes of Nazi-occupied Europe.

Such traumas often reach beyond the survivors themselves. What they do or do not express about their pasts can profoundly touch those closest to them.

Novelist Jenna Blum explored how the secrets and silences surrounding the Shoah-or Holocaust-can cause ripple effects in her debut 2004 novel, Those Who Save Us. Now, in her just-released third novel, The Lost Family, she delves evermore deeply into the psychological fallout of the Holocaust through her fictionalized portrait of chef and restaurateur Peter Rashkin, a German Jewish immigrant who survived the death camp through the fluke of a reassignment to kitchen duty at Auschwitz.

But it is not Peter's story alone. It is also the stories of his American-born wife, June, and their daughter, Elsbeth, who must bear the burden of living with a husband and father who lost his first family and cannot talk about his past.

In a starred review, Kirkus called Blum's latest piece of fiction an "unsentimental, richly detailed study of loss and its legacy."

For Blum, a Boston-based writer and teacher, the Holocaust has been a preoccupation since her book-filled childhood in suburban Montclair, N.J., where two stories struck a chord: Judith Kerr's semi-autobiographical young adult novel When Hitler Stole Pink Rabbit and Anne Frank's The Diary of a Young Girl .

"I had a hiding place in my attic [like Anne Frank]," recalled Blum, "where I stored food and books. I didn't share that space with my parents."

Blum's "lifelong obsession with why people treat others so meanly," she said, took her from Kenyon College, where she majored in English, to the Twin Cities in her early 20s, where she became an interviewer for Steven Spielberg's Survivors of the Shoah Visual History Foundation.

" The Lost Family, " she said, "was inspired by one of my interviewees. He was a chef who survived two camps. He was fired from his job in the United States because people were upset with his tattoo."

The plight of the Holocaust survivor and other political refugees who have been persecuted, Blum observed, is complicated by an "underwater silence [of] not being able to explain" the tragedies they saw and experienced.

They cannot explain, she said, because they often move to a putatively sunnier society, like the United States, where people are encouraged to be optimistic and not dwell on past regrets. Frequently, said Blum, those holding onto their nightmares of the past shut down emotionally and compartmentalize their feelings in ways that yield tragic results- for themselves and those closest to them.

While the darker, more nuanced dimensions of relationships are front and center of The Lost Family , Blum admits to having had a lot of fun with the lighter side of the book, particularly because she, like her character Peter, is an avowed foodie.

To research what a German Jewish gourmet might be serving in his Middle-European-inspired restaurant in the New York of the 1960s and 70s, Blum devoured cookbooks and Gourmet magazines from that time period-and tested the recipes for every dish itemized in the menus she devised for several sections of the book.

The daughter of atheists-her father called himself a "bagel Jew" and her mother described herself a "recovering Lutheran"-Blum said that her special status as a "Mischling," the term the Nazis used to describe those of mixed Jewish and Christian ancestry," has given her entrée into several worlds. In recent years, though, she has identified more strongly with her Jewish background. "It has become more pronounced in today's political climate," she said, referring to the increasing incidence of anti-Semitism and other forms of prejudice here and abroad.

Blum, who earned a master's degree in creative writing from Boston University, is in the early stages of her fourth novel, which, she said, is a "continuation of Peter's story." She said that she is particularly gratified by the Jewish community's response to her work, noting that many have been appreciative of her focus on the Holocaust's impact on multiple generations.

"'Don't forget the children of the survivors,'" she said, recalling the pleas of one of her readers at a book event years ago.

In The Lost Family , she has remembered them-and then some.

Blum will be reading from The Lost Family and signing books at two Chicago-area wine-tasting events this summer: on Aug. 11, 4 to 6 p.m., at Wilmette's Wine Cellar, and Aug. 12, 4 to 6 p.m., at Northbrook's Book Bin.