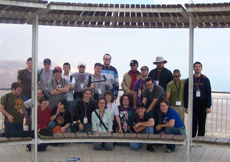 Seventeen participants toured Israel on birthright israel's first-ever trip for people with Asperger's syndrome, including three Chicagoans. Many of the staff members were from Chicago as well.
After touring Yad Vashem, Israel's Holocaust memorial, special education teacher Rose Sharon, of Skokie, knew that the 17 kids on birthright israel's first-ever trip for participants with Asperger's syndrome would need extra time to absorb what they had just seen.

She found space for the group to decompress, and after asking them to express their feelings in words, pictures or symbols, all 17 of them had something to share.
One participant, Brad Leifer, 21, a student from Bethesda, Md., drew a chart of impressions in a mix of sentences and pictures of lightning bolts and physical barriers.

Opposing forces (single mindedness) leads to stalemate and/or everybody loses and/or both are destroyed," he wrote in a page that was included in a group journal.
Another boy wrote, "If there was one word I could use to describe this morning it would be 'shocking.' I have learned about the Holocaust over the years at school. By coming to Israel, I get to see this firsthand. It is part of my birthright."

The group journal was a tool Sharon developed to help the group keep track of the experience. At night she sometimes would be moved to tears as she would review the pages from the participants, their counselors, and even the tour guides, soldiers and medics who accompanies them.

[This trip] was a privilege and an honor. It was my dream to be lucky enough to do it," says Sharon, who initiated the program after spending many summers as director of Camp Ramah in Wisconsin's Tikvah program—a special education group that includes many participants with Asperger's syndrome.

The neurobiological disorder is considered the highest functioning type of autism.
Birthright provides free 10-day trips for Jews between the ages of 18 to 26 who have never visited Israel on an organized tour. Groups usually have two staff members for every 40 participants, but the Asperger's group traveled with five staff members. The counselors, who all had worked with Sharon at Camp Ramah, helped the participants with tasks such as packing suitcases and social nuances.

This trip exemplified what birthright represents: attempting to provide all Jewish students with an Israel experience. Everyone, regardless of their status, should be able to visit Israel," said one counselor, Brandeis University student Ari Gleicher, of Skokie.

Sharon was determined to lead a trip for participants with Asperger's after directing campers who were graduating the from the Tikvah program and wishing they could have an additional meaningful Jewish experience. She thought the birthright trip, which had benefited many other young adults, could also prove invaluable for those with Asperger's.

Some of the participants on the trip, which was organized through birthright in conjunction with KOACH, the Conservative movement's college outreach program, and the United Synagogue of Conservative Judaism, were former and current campers from Ramah. Three participants were from the Chicago area or attend school here.

Participants were selected based on lengthy interviews. Once the participants were accepted their special needs had to be met, beginning with the flight to Israel.
"We are speechless with gratitude and delight that [our son] will have a chance to live out his dream," one parent wrote; another parent wrote that the trip is "a dream come true for our family."

In Israel, Sharon says the participants were totally attentive.

They would sit on the bus with their maps, watching everywhere we were going. I had 17 participants listening to the tour guide and every time there were questions, I would have 10 out of 17 raising their hands."

People with Asperger's may have trouble relating to others and picking up on basic social cues. They can be obsessive and fear changes in routine. The condition sometimes is characterized by above-average intelligence often coupled with focused passions for subjects such as map reading or collecting.
Writing in the journal, Martin Barken, 26, of San Diego, said, I feel so connected here, not so much to the religion, but to the history and people.

The experience was as meaningful for me as it was for the young people who joined us," said KOACH Director Richard Moline, who joined the trip. "I learned from them, shed myself of some unfortunate misconceptions, and took true delight in their sense of wonder.

Sharon points to no single incident as the defining moment in the 10-day trip; rather, she said "something significant" happened in every place the group visited.

At the Kotel [Western Wall], one participant put on tefillin for the first time. At Yad Vashem, 17 students wanted to share their thoughts. Every place we went, there was something very special. Would I do it again? Absolutely."
Advertisement
Top Stories from Oy!Chicago