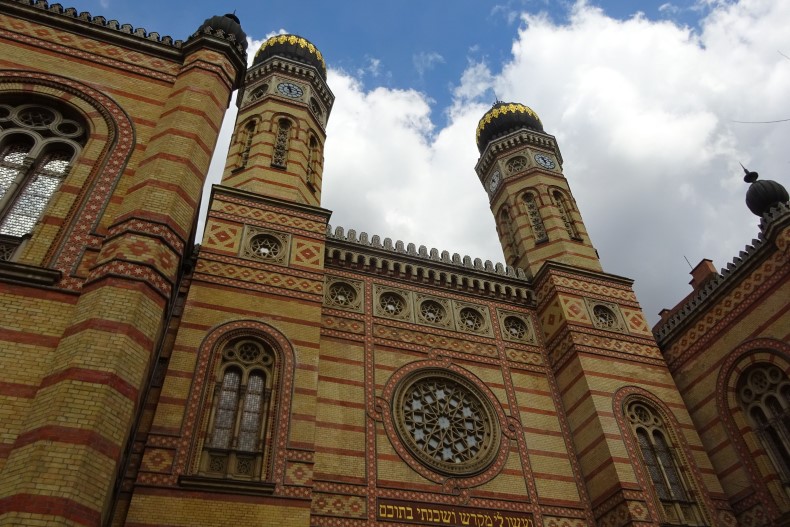 Jewish life in Europe dates back thousands of years. Today, capital cities like Budapest, Prague, and Vienna are rich with Jewish history, architecture, and culture. If you're planning to visit, here's a guide to help you discover the vast world of European Jewry and enrich your travel experiences.

Find the largest synagogue in Europe -- in Budapest

Front and center in the Jewish Quarter is the magnificent Dohany Street Synagogue, designed in Moorish-style with Oriental-Byzantine décor and twin domes that reach towards heaven. The synagogue is the largest in Europe, and the second largest in the world. Built in 1859, this massive house of worship can hold 3,000 people and remains a thriving center of Jewish life. In back is the Tree of Life Memorial, a silver weeping willow with leaves listing the names of Hungarian Jews killed during the Shoah (Holocaust). Four red marble plates commemorate the 240 righteous gentiles who helped save Jews during the Holocaust. Note that next to the synagogue once stood the house where Theodor Herzl was born. The synagogue is open for tours as well as Shabbat and daily services. Visit www.greatsynagogue.hu

The Hungarian Jewish Museum, also located inside the synagogue, features a large collection of Judaica, including Jewish gravestones from the Roman Empire to hand-engraved silver Torah scrolls and rare manuscripts by Jewish scribes.

Once the site of the Pava Street Synagogue, the Holocaust Memorial Center is a national institution, established in 2002. The museum offers interactive permanent and special temporary exhibitions as well as cultural events. Guided tours available. Visit www.hdke.hu

Don't miss the haunting "Shoes on the Danube," along the Danube Promenade. The 2005 memorial pays tribute to those who were shot on that site by the Arrow Cross in 1944 and fell into the river. Observe the 60-pair of permanently bronzed 1940s-style shoes, many among them children's, now covered with flowers, candles, and Israeli flags.

Take a break with kosher sweets and coffee at Frohlich Bakery, near the Great Synagogue. Their 5-layer flodni cake is out of this world.

In addition to its long, illustrious history, the Jewish Quarter is now one of the most popular, bustling areas in Budapest, filled with ruin bars (bars constructed from abandoned buildings), cafes, and galleries.

Prague holds the largest collection of Judaica outside of Israel

Prague enjoyed a strong Jewish community that spanned more than 10 centuries, highlighted by scholars, historians, and artisans who helped shape the Jewish Quarter, known as Josefov.  One of the notable sages was Rabbi Judah Loew, known as the "Maharal" for his great wisdom and Torah knowledge. Rabbi Loew created the famous Golem of Prague out of clay to protect the Jewish community from blood libel in the 16th century. It is believed that Loew put the Golem's remains in the attic of the Old New Synagogue. Today, many people visit the grave of Rabbi Loew to ask for his blessings.

The Jewish Museum of Prague, founded in 1906, showcases a collection of artifacts from synagogues that had closed or been destroyed. Today, the museum includes six building/monuments, filled with sacred Jewish artifacts, children's drawings from the concentration camp Theresienstadt, oral histories, and more. Visit www.jewishmuseum.cz/en

"Prague is unique because it wasn't destroyed during the war, and, as a result, the Jewish sites remain as they were," said Rabbi David Begoun of L'Chaim Center in Deerfield. "Also, Hitler had a diabolical plan to create a Museum to an Exterminated Race. As he pillaged Jewish communities, he looted their Judaica and stored it in synagogues and schools. The Pinkas synagogue, with the names of the 77,000 murdered Czech Jews inscribed on the wall, is one of most moving monuments to the Holocaust I've ever seen. And, you can spend a great Shabbat with Chabad of Prague."

In the early 20th century, Vienna was one of the most prominent centers of Jewish advancement in Europe, known for the works of Sigmund Freud, Gustav Mahler, and Franz Kafka. The former Jewish Quarter located in Leopoldstadt was once known as "Matza Island."  Today Vienna's main synagogue, the Stadtempel, serves as the focal point of Jewish life.

Visit the Jewish Museum, which highlights Jewish life in the Middle Ages as well as the 19th and 20th centuries. The Shoah Memorial in Judenplatz stands as a huge concrete cube that looks like a library, but the doors are locked and the books are turned inward. Each volume symbolizes an Austrian Jew who was lost during the Shoah. Visit www.jmw.at/en

Sigmund Freud's house, now the Sigmund Freud Museum, is open for touring, where you can see his waiting room, extensive antique collection, and private films. The museum is also used for research, education, and Europe's largest library on psychoanalysis. Visit www.freud-museum.at/en

The best way to explore the Jewish Quarters in each city is via a guided walking tour -- but plan early because they book up fast.

Mira Temkin is a Highland Park-based travel journalist who writes about travel and theater. Follow her at miratemkintravel.com. .