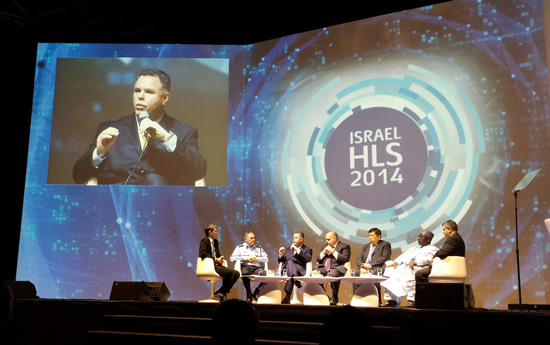 McCarthy and Masters spoke at plenary sessions on management before and during emergencies, and cybercrime, respectively. During a simultaneous International Police Commissioners Conference, McCarthy was part of a panel discussion on “police leadership during crisis.” He used the opportunity to talk about both his experience as NYPD’s Chief of Operations during 9-11 and Chicago’s successful 2012 hosting of a NATO Summit.

Beyond the conference, the Chicago delegation visited the Israeli Police Air Unit, the police headquarters for Jerusalem’s Old City, Magen David Adom’s command center, the national railway security operations center and the Home Front Command’s Civil and Military Training Center.  There was also time – but not much – for the group to do some more traditional sightseeing in the Jewish State.

Reflecting on the week, McCarthy observed that “the two international law enforcement conferences in Israel this week were invaluable experiences to both share what we in Chicago have learned, often the hard way, as well as to learn from our Israeli partners on ways to better serve and protect our own community. CPD is a large and highly skilled police force, but we must strive to learn whatever we can, from whomever, wherever we can.

"In addition to engaging dozens of Israelis, I also learned much from my fellow Chiefs of Police from Portugal, Cyprus, the Philippines and Los Angeles," he continued. "While always supportive of collaboration between police forces, it is clearer than ever that such cooperation must increasingly happen on the international level, particularly when combating the threat of terrorism while guaranteeing the civil rights of our citizens. Being In Israel during a week of deadly terrorist stabbings and car attacks added a somber dimension to this special experience. The resiliency of Israeli institutions and the Israeli people is really something to see. It was a meaningful experience. I'm grateful to those who put it together and made it possible for several of us from Chicago to participate."

Masters said the safety and security of Chicago and Cook County has already improved because of this experience.

"As security professionals around the world increasingly work to address similar threats - from cyber breaches to terrorist attacks - the opportunity to share best practices is critical," he said. "We will now bring the lessons home; our community should feel secure knowing that the relationships in Chicago and Cook County between homeland security, law enforcement, emergency management and JUF is a testament to the strong relationships, common interests and shared concerns of everyone."

Tcath said, “this is JUF’s third mission to Israel for Chicago’s senior law enforcement officers. Helping connect and thereby improve the work of both Israeli and Chicago police is a natural role for JUF, committed as we are to the safety of the entire Chicago community and the Jewish State. From advising us on ways to enhance the physical security of our Jewish community's institutions to helping us ensure the safety of JUF events – everything from dinners to pro-Israel rallies – we are grateful for the extraordinary commitment of CPD, Cook County’s Homeland Security and Emergency Management and our other public law enforcement partners. These missions to Israel both reflect and help deepen these valued relationships."