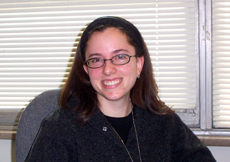 In a tourism video shown to groups before they ascend to the Sears Tower Skydeck, the narrator says, "Chicago is a city that takes culture, exploring and just having fun seriously." That statement resonated with the group of some 20 teens from Israel and Chicago watching the presentation. From bike riding at Navy Pier and sightseeing downtown to shopping on Michigan Avenue and riding Six Flags Great America's roller coasters, the group of 11 Israelis matched with local teens didn't miss a single highlight in their weeklong tour of Chicago.

It was only during long bus rides or while waiting in line that one could see the smiles and excitement of visiting the United States fade. In these quiet moments one teen would pensively stroke a gold charm embossed with an image of his late father, a girl would rest her head in her arms, and another would sit solemnly alone.

Perhaps they were just catching their breath from the action-packed visit, or perhaps, during these rare down times, their realities back home crept back into their consciousness.

The Israeli teens, ages 14-16, were selected to visit Chicago by the Jewish Agency for Israel (one of JUF's overseas beneficiaries) because they had either survived a terrorist attack or been orphaned by one. Susan Ivri from JUF/JF's Israel office, who helped arrange the trip and served as a chaperone, said, All of these kids have suffered terribly and continue to suffer. It is a huge mitzvah to take them away from their misery.

The weeklong program, Kef B'Kayitz (Fun un the Summer), was initiated and funded by the Jewish United Fund/Jewish Federation of Metropolitan Chicago as part of the Israel Emergency Campaign. The program, in its second year, exists for the simple goal to give Israeli teens a week of fun. It's a chance to give them back a week of their childhood, said Paula Harris, assistant vice president of interdepartmental projects at JUF/JF, who organized the program. Many of them have taken on more responsibilities because they lost a parent or are suffering financially, she said as she nodded at Riki, a 16-year-old who had to quit school to work in her father's fruit store.

When asked about their experience in Chicago, the Israelis each listed their favorites of the week's activities. They were most enthusiastic about their opportunity to form friendships with the Americans and exchanged e-mails and addresses in hopes of keeping in touch. Riki Shatashvili of Afula, like many of the Israeli teens, expressed her relief in having a break from life back home. When asked why she wanted to participate in the program, she answered, To forget everything, to have fun and to break up the normal life. Roee Masad concurred,

It's important to get to have another mentality from what is at home.

The Israeli victims of terror were not the only beneficiaries of the program. The Chicago teens, who were selected for the program because of their eagerness to meet Israelis, had a rare opportunity to get an insider's perspective on the grievous effect that nearly four years of terrorism in Israel has had on its citizens.

You hear about terror attacks on television and in newspapers, but for us, thank God, it never hits close to home. But we're meeting kids who live with this reality, and it leaves a powerful impression on us, says Aaron Finestein of Skokie. Ivri, who lives in Jerusalem, says, It is important for me to be with these kinds of people who have suffered so much. It keeps my priorities straight.

Though the end of the week meant the Israeli teens returned to their families, who are facing a harsh and even horrific reality, perhaps their trip to Chicago brought them a measure of comfort. As Harris said, A week of respite is very therapeutic, and they know a community cares about them.
Advertisement
Top Stories from Oy!Chicago