Connect to the past, bridge to the future 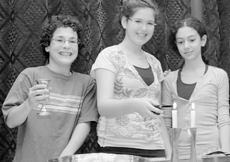 From left are middle-school students Joseph Gelman, Nina Friend and Sarah Lisovich preparing for Shabbat together at the school's Friday Shabbat community lunch.
Ask a student, a member of the faculty, a parent or an alumnus about Bernard Zell Anshe Emet Day School in Lakeview, and one of the first things he or she will mention is "community." There's the parent community, the student community, the community of teachers and administrators, the greater community and a myriad of combinations of them all. "I thought I knew what they meant when they kept mentioning 'community,' until I started here and really found out," says Alyson Horwitz, head of school at BZAEDS for three years.

In practice, "community" at the independent day school celebrating 60 years since it opened in 1946 means that the staff feels a sense of "rich and vital partnerships" between those connected to the school, says Horwitz. For students, it means that their teachers forge close relationships to each of them on an individual level, and kids in various grades have opportunities to spend time together. And for alumni, it means that they come back to visit their old stomping ground.

It is this sense of community that the school, housed in Anshe Emet Synagogue, is striving to maintain amidst its steady growth in enrollment. Today there are 471 students, from nursery to eighth grade. "It's our mission to have an innovative and nurturing environment, and even with record enrollment, we're doing a remarkable job of that," says Horwitz.

Maintaining consistent values has been a priority since the school's beginning in 1946, says Pamela Popeil, director of admissions and communications. The mission—to be a pluralistic, independent school—is one that remains true to that of the school's founder, Rabbi Solomon Goldman. In 1946, his idea was revolutionary, as the few day schools in the United States were Orthodox. Sharing the same values with the school's founder is the reason that after 60 years, the theme of their celebration is "Connect to the past, bridge to the future."

"Our mission is sacred, it has to be preserved," says Popeil.

In honor of the 60th anniversary, the school held a kick-off celebration in September, a "Read 60 for the 60th" challenge for the students and various other programs throughout this school year. In December, the school was honored with a resolution presented by Alderman Helen Shiller to Chicago's City Council, saying, "That we, the mayor and members of the City Council of the City of Chicago do hereby pay tribute to the Bernard Zell Anshe Emet Day School and extend our best wishes for many more years of excellence."

"Excellence" for the teachers and leaders at the day school means that they are raising "the next generation of Jewish leaders," says Popeil. Through every aspect of the curriculum, the faculty try to "teach the whole child to fully develop his or her intellectual, personal and spiritual potential."

Part of raising future leaders means that academic excellence is key to the school's vision. Students are in classrooms with a student-teacher ratio 7.5:1. Subjects are integrated so that it is not unusual for the children to be reading a book in literature that relates to their history course. The children have access to cutting-edge technology including SMART Boards (interactive white boards), wireless Internet, virtual dissections in science, and mobile computer labs containing laptops for each child. Homework might require students to listen to their teacher's podcast.

It is no surprise that the graduates of the school go to Chicago's most selective high schools.

Raising children to be responsible "citizens of the world" is at the core of the Anshe Emet program. Last spring, eighth-grade students organized a Darfur rally outside on the school's field, inviting speakers and students from nearby public schools to join them. "The students have a sense of existing beyond our school community, of being a partner in the greater community," says Horwitz.

The value of tzedekah is nurtured in the students beginning in nursery, so that by the time they are in middle school, they are initiating their own projects. This year, the older students are selling hot drinks each morning, raising $1,000 for a Lakeview food pantry and another $1,000 for The ARK.

The Hebrew language and Israel are emphasized in BZAEDS's Jewish studies curriculum. Students can already understand basic instructions in Hebrew by kindergarten and graduate fluent in the language. In eighth grade the students visit Israel in a program that includes meeting teens from JUF's Partnership 2000 region of Kiryat Gat, Lachish and Shafir. The Israeli teens come to Chicago to visit the BZAEDS kids as well.

For Popeil, there is one incident that sums up the school and its commitment to education, to Hebrew and to community. She brought a group of visitors to an eighth-grade Hebrew class where the students were reading a poem and listening to a song. All of a sudden, the entire class broke down crying. Not sure what to do in such an awkward moment, Popeil asked the teacher to explain what was happening. It turned out the Hebrew poem had been about saying goodbye, and for the eighth-graders, it hit home.

For more information about BZAEDS, call (773) 281-1858 or go to www.bzaeds.org.
Advertisement
Top Stories from Oy!Chicago