Chicago veteran pol Sid Yates gets his due in new book

Stories and surprises from 50 years in Congress 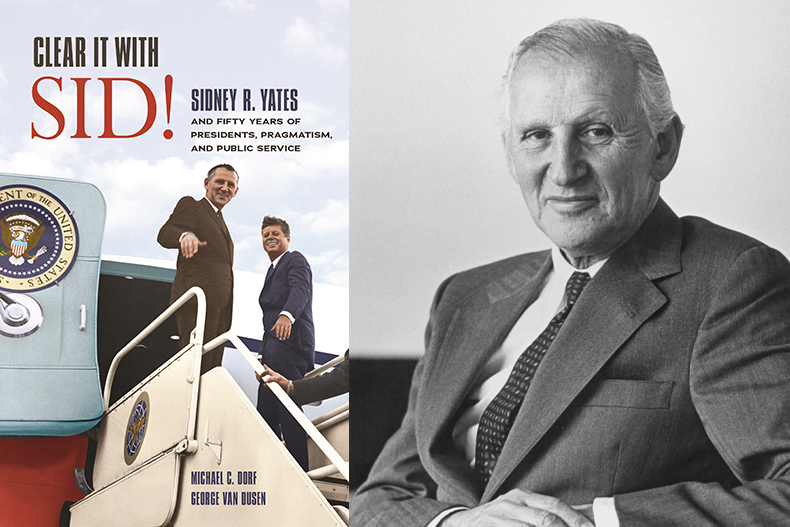 Most Chicagoans of a certain age have heard of the late Sidney Yates, the Democrat who represented his north lakefront district constituents in the United States Congress for almost 50 years. They may also be aware of his liberal bona fides and his pride in his Jewish heritage.

But what they may not know is that Yates, who died in October 2000, at age 91-just two months prior to the death of his only child, Cook County Judge Stephen Yates-was a Gilbert and Sullivan operetta and Broadway musical aficionado who could delight voters with song, plus one of the House of Representatives' best golfers. An equal opportunity employer, Yates was also one of the very few congressmen of his era to hire a woman, Mary Bain, as his chief of staff.

These tidbits-and many more-are a part of Clear It with Sid! Sidney R. Yates and Fifty Years of Presidents, Pragmatism, and Public Service , a just-released University of Illinois Press book by Michael C. Dorf, an attorney who was Yates' longtime special counsel and campaign chairman, and George Van Dusen, the mayor of Skokie, who served as the Congressman's director of district operations for more than a quarter-century.

While biographical details of Yates' life-including the fact that he was a star basketball player, as well as a star student at Lakeview High School and the University of Chicago-are not the be-all and end-all of the book, they richly illustrate the authors' accounts of a formidable legislator of a bygone era who knew how to spar and negotiate in a manner many find uncharacteristic in the present-day body politic: with courtesy and civility.

"He was the picture of class," said Van Dusen, who recently sat down with his co-author to talk about the book. "He was always able to work with the other side. We have gotten so far from that today."

As Dorf and Van Dusen tell it, from the time Yates entered the House of Representatives in 1948, to his last term, which ended a year or so before his death, the congressman was successful in bargaining and working behind the scenes with political adversaries to champion causes in which he believed.

Yates' trifecta of savvy, intuition, and goodwill worked particularly well in the effort to promote Hyman Rickover, the "Father of the Nuclear Navy," to the status of admiral, an appointment that had been stalled largely due to antisemitism. Years later, in the 1980s, when he was the head of the powerful Appropriations subcommittee responsible for funding the National Endowment of the Arts (NEA), Yates was able to broker a deal to save the NEA from eradication, an effort that had been spearheaded by both fiscal and social conservatives in Congress and the Reagan Administration.

"He was quite sagacious," Dorf said, "and he would always try to anticipate the objections to a bill."

There was nothing he liked better, Dorf continued, than to attend a House-Senate conference committee to iron out differences in legislation, since it was an opportunity for the smartest of legislators "to outfox each other."

Perhaps only once, Van Dusen and Dorf said, did Yates himself feel outfoxed. As they relate midway through the book-and expanded on during a conversation with JUF News -Yates worked hard for JFK in 1952, when the future president was vying for a Senate seat from Massachusetts. Yates was brought into the state a number of times to shore up support among Jewish voters in Boston who were wary of the Kennedy clan because of patriarch Joe Kennedy's well-known isolationist and antisemitic views. Kennedy won the race against Henry Cabot Lodge-but only by a slim margin-and it was thought that Yates' support, at least in part, put JFK over the top.

So, when Yates left the House of Representatives in 1962 to run for the Senate in Illinois against Republican Everett Dirksen, in a race marred by antisemitism, he fully expected that President Kennedy would reciprocate and vigorously campaign for him. That not only did not happen, Dorf and Van Dusen said, but Kennedy, for a variety of reasons, not so quietly backed Dirksen. In the end, Yates lost to Dirksen, garnering 47 percent of the vote.

Forgiveness or not, Yates retook his House seat in 1965 and served for another 35 years. During that time, he was a staunch defender of Israel, an eloquent advocate for Jewish refuseniks petitioning to leave the Soviet Union, and a moving force in the establishment of the United States Holocaust Memorial Museum. His expertise in Jewish affairs was such, the authors said, that when former House Speaker Tip O'Neill was asked his opinion on any issue relating to the Jewish community, he would defer to Yates by saying, "Clear it with Sid." Ergo the title of the Dorf-Van Dusen book.

The co-authors, who spent two decades digging through archives and correspondence and interviewing scores of former and current public officials, also devote considerable space in their early chapters to the local Jewish political establishment, including Chicago Alderman Jacob Arvey and Congressman Adolph Sabath, who helped Yates develop his chops. Both said that the research experience renewed their appreciation for their former boss.

"I always thought he was a great guy," said Van Dusen, "and I learned about his capacity to grow and change."

Then, Dorf and Van Dusen will speak at The Standard Club on Nov. 19 at noon. For more information, visit here .