The film is a real-life family affair. 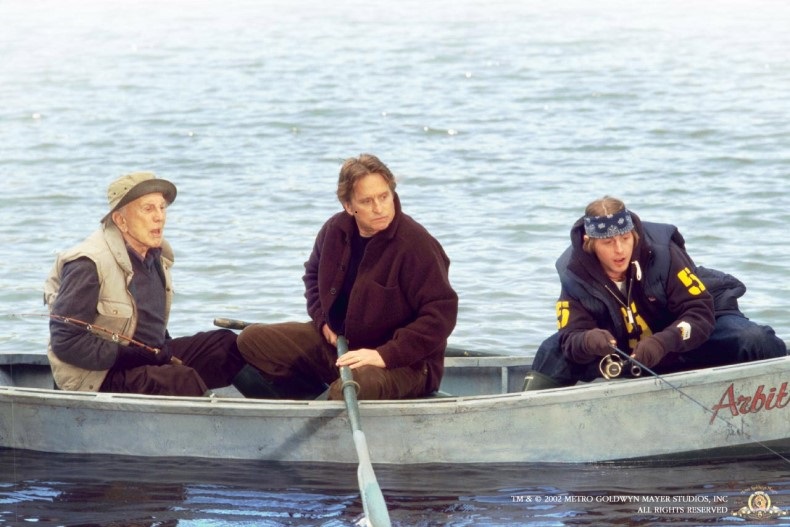 Three generations of family in MGM’s "It Runs In The Family," 2003. From left: Kirk, Michael, and Cameron Douglas. Credit: MGM Studios.

In an opening scene of the new movie It Runs in the Family , the youngest son-11-year-old Eli (Rory Culkin)-sings the four questions at the family's Passover seder. The boy's solo is ruined early on when his father (Michael Douglas) answers his ringing cell phone, and his grandfather (Kirk Douglas) and father subsequently bark at each other for not being more supportive members of the family.

The movie (directed by Fred Schepisi), following three generations of men in one modern New York City Jewish family, conveys the importance of prioritizing family, after traveling a dysfunctional path to get there. Like the characters, the actors who play them in the movie have learned to prioritize their lives.

Kirk and Michael had never before collaborated on a film. For 20 years, the father and son had been talking about working together, but they never could find the right project. The 9/11 attacks convinced them, like so many others, of the fragility of life and that family counts above all else; they realized there was no time like the present to work together. Their collaboration symbolizes Kirk's self-transformation. After a lifetime of living the privileged lifestyle of a Hollywood movie star, Kirk has re-prioritized what matters most in his life, namely his family and his spirituality.

The living legend--who has starred in 86 movies in his 86 years of life, including Spartacus , Cast a Giant Shadow , and Lust for Life --admits that as a young man he didn't spend enough time with his four sons. But, over the last decade, two tragedies in his life have taught him to re-prioritize what's meaningful to him.

In 1991, Kirk survived a helicopter crash that killed two young people. Five years after the accident, he suffered a stroke that took away his ability to speak. Slowly, he has been relearning to talk. His character of the family patriarch in It Runs in the Family was rewritten as a man who, like Kirk, is coping with the repercussions of a stroke. After the crash, Kirk grappled with life's big questions, like why he was spared when others perished in the accident. "I began to think about my own mortality," he said. "I began to think outside myself. So much of my life was making three movies a year and I was too involved with myself. [The crash] has shaped me into what I think is a better person."

Kirk also has redefined himself as a Jew. He believes he survived the crash because he needed to come to terms with his Judaism. At 14, Kirk had distanced himself from Judaism after what he classifies as a frightening encounter in Hebrew school with the biblical story of Isaac's binding. Some 60 years later, post-crash, he flew to Israel to film a movie. On his trip, he visited Mt. Moriah, where Abraham was believed to have offered Isaac as a sacrifice to God. Kirk no longer felt the fear he had experienced the first time he heard the biblical story. Instead, he said he realized that God was teaching an important lesson to humanity.

At 83, Kirk even celebrated his second bar mitzvah, because he had heard that in Jewish wisdom, a man lives 70 years and then he starts his life anew. To Kirk, Judaism is full of drama just like the movies. "A rabbi once told me that I would like to study Judaism because it is so dramatic," Kirk said. "That's why they make so many movies from the Old Testament, because every plot you can conceive of is in there: Cain kills Abel, the brothers of Joseph sell him into slavery, King David impregnates Bathsheba and has her husband killed. What is interesting about all those families is, you have families that do bad things, but they overcome the bad things and eventually do good things. I find that inspirational."

He is astounded by the impact the Jews have made, despite their tiny numbers.  "Judaism fascinates me because in the entire world there are about 14 million Jews--that's infinitesimal," he said. "Yet, the Jews have made an impact on the world in every category--and they are still around. When you study the history, you realize they should have been wiped out years ago. Maybe because I'm an actor and I'm interested in drama, that history, [to me], is as dramatic as it comes."

Kirk focuses more on the spiritual side of Judaism rather than its ritual. But no matter what, he always fasts on Yom Kippur. "Even when I went away from Judaism, I always clung to Yom Kippur-the Day of Atonement and the highest holiday-when we fast for our sins," he said. "But I still worked in pictures, and I would say, 'You try making love to Lana Turner on an empty stomach.'"

Metro-Goldwyn-Mayer Pictures and Buena Vista International present It Runs in the Family a Further Films production.

This article originally ran in JUF News in May of 2003.

"...The Jews have made an impact on the world in every category--and they are still around. When you study the history, you realize they should have been wiped out years ago. Maybe because I'm an actor and I'm interested in drama, that history, [to me], is as dramatic as it comes. "