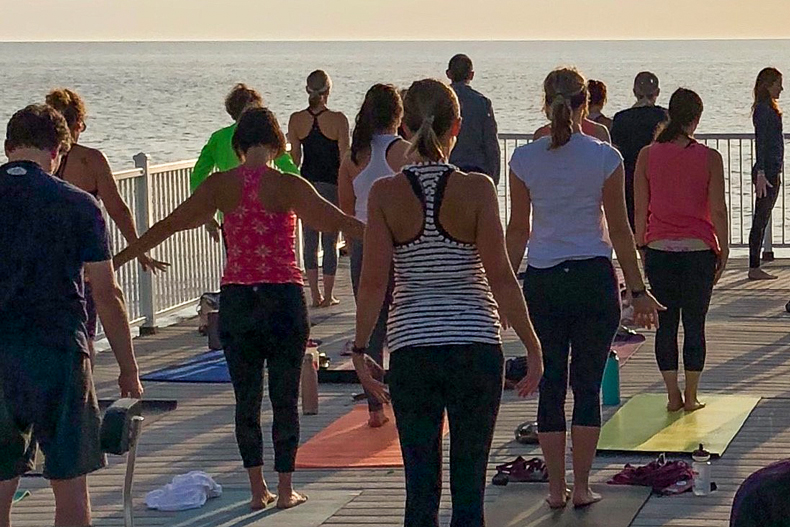 Deborah Wineman has been a yogi for a long time. A certified yoga instructor, she began practicing the discipline in her 20s. But it wasn't until two decades later that Wineman, who was raised in a less observant Jewish background, discovered how she could infuse Judaism into her yoga practice. It was then that a mutual friend introduced her to fellow yoga lovers Rebecca Minkus-Lieberman and Jane Shapiro.

Minkus-Lieberman and Shapiro are two of the co-founders of Orot: Center for New Jewish Learning, founded in 2014, offering a variety of Jewish experiences integrating study and wisdom. The programs, yoga and meditation among them, offered through Orot -- a past JUF Breakthrough Fund grant recipient -- are designed to engage heads, hearts, bodies, and spirits in immersive ways that make Jewish wisdom accessible to all.

"We use different modalities for people to find their way in -- through music, art, reflective creative writing, and embodied practice. Yoga is just another natural avenue in for people," said Minkus-Lieberman, a longtime educator in the Jewish community.

When Wineman took her first Orot class, she was hooked. "The class was about Shabbat as a practice of mindfulness," she said. "I was like, 'Oh my God. This is it.'"

She hit it off right away with Minkus-Lieberman when they realized they shared a passion for tapping into the wisdom of yoga. Soon after, the two co-taught their first class, a Rosh Chodesh yoga class, in Wineman's basement, figuring Wineman's already-established Jewish yoga clientele might be interested in trying out a Jewishly-infused meditative experience for the first time. As they predicted, the class was a hit.

So how does one connect the Hindu practice of yoga with Jewish wisdom? Wineman and Minkus-Lieberman say the two disciplines naturally align. "When I was studying yoga, I learned that there are 10 living principles--right away, I thought about the Ten Commandments. These feel very similar," said Wineman. "The 10 principles, the Yamas and Niyamas , create wholeness and are things you do in the world. It reminded me of the mitzvot , the ones you do personally and then the ones with God or with the outside world."

For the past three years, Wineman and Minkus-Lieberman have been teaming up through Orot to forge ways to create the embodied experience of Jewish teachings and rituals for the Jewish community. They teach special yoga events around the Chicago area themed around the holidays, Jewish philosophy, and soul traits, inspired by the Mussar practice. Through their classes, they introduce a Jewish theme and integrate it into the meditation through body, breath, and movement. It's not just about thinking about the Jewish text, they say, but about feeling it in your body.

"There are many instances in our tradition where we're asked to put ourselves back in a certain reality," Minkus-Lieberman said. "We're trying to give people opportunities to really experience what it feels like and put themselves into the narrative of the Jewish people. Yoga is a wonderful avenue that allows us to do that."

For instance, in preparation for Passover this past spring, they taught a yoga and meditation class intended to embody the felt sense of liberation through posture and movement. "You're supposed to imagine as if you yourself went out of Egypt. You can think about that intellectually-you can think about liberation and slavery," Minkus-Lieberman said. "But in this class, we really wanted people to personally experience the arc of Passover, of moving from an enslaved experience to a liberated experience."

The instructors use yoga as a tool to explore Jewish contemplative questions throughout the entire Jewish calendar. For Purim, they ask students to reflect on what joy feels like in their body. For the High Holidays, they match postures and movements to illustrate showing up more fully in the year ahead. On Chanukah, they explore what it means to embody light in times of darkness.

In the summertime, they hold a beach yoga class--this year on the morning of July 8 at Glencoe Beach-where they ask their students to attune themselves to, and give gratitude for, the natural world around them, the gifts of the sunrise, the sand, and the waves.

All the programming shares the goal of carving out a space of refuge amidst the chaos of daily living, explained Minkus-Lieberman. "Life is just crazy," she said. "There's noise and information overload all the time, and people are craving opportunities for quiet, rest, refuge, and meaning."

To register for the "Moving with the Waves" yoga experience on July 8, visit bit.ly/MovingWithWaves.

"We're trying to give people opportunities to really experience what it feels like and put themselves into the narrative of the Jewish people. Yoga is a wonderful avenue that allows us to do that."